Was it a Ghost? A Sliver of a Very Early Memory. 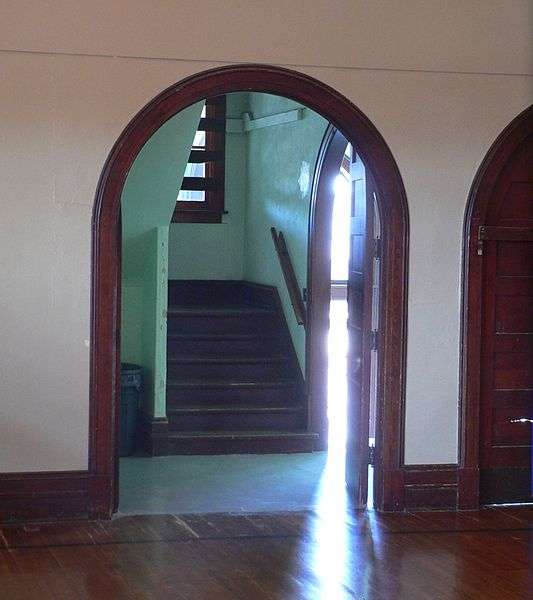 After some investigation, I think I can confirm that I would have been about 3 years old at the time of this memory. I remember making a visit to what I now know was a college campus. I remember the older buildings that just scream “college”. I remember the mature trees. I remember the weather was nice. I'm almost sure I remember music, like from an instrumental ensemble or orchestra. Often when I hear the popular graduation tune, Pomp and Circumstance, I flash back to this memory, though this visit wasn't for a graduation. I'm not sure why the song stands out. I suppose it could be bleed-through from another memory, or perhaps there really was a group there playing it. My mother and I were apparently taking an uncle of mine to his freshman orientation, and it would have been in the summer of 1981.

Now to the important part of this memory…

…or at least the part that stands out and has remained in my head since then. I remember being on the upper floor of a building, in a foyer or hallway next to a set of stairs going down. When I picture it now, I picture the walls being white and everything being very bright. But the highlight of this memory is the kind smile and wave of a woman who was not familiar to me, peaking around the corner in a doorway. I'm sure my mother was engaged in a conversation ahead of us, and this woman was behind us. Clearly I was really cute and drawing attention from the ladies. That's it. That's the memory.

Now why in the world would that be a memory that I remember and still replay in my head 32 years later? Oh sure, it's easy to look back now and embellish the memory or make it into something it's not. It's easy to picture the woman surrounded by an amazing and beautiful white light, but did it really happen that way? And why that memory? Why that exact moment? I don't have a ton of memories from that age.

Was it a ghost?

As you probably know, it is said that young children frequently see spirits, before society gradually teaches them that this is not acceptable. So was it a ghost? A family member who passed before I was born? Or was it just a random stranger who managed to find herself in a starring role in the cloudy memory of a toddler? I may never know… but whenever anyone asks me if I've seen a ghost, my memory takes me back to that day.