Thomas Edison and the phonograph… 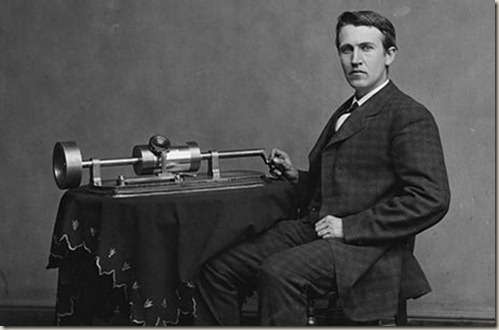 Thomas Edison and his phonograph

Though he was working on it in 1877 and filed for a patent a few months earlier, it was on this date (February 19th) in 1878 that Thomas Alva Edison received the patent for his newest invention, the phonograph. He was also one of the independent inventors to invent the first microphone during this same time period.  All of this happened one year before he created the light bulb.

“The phonograph was developed as a result of Thomas Edison's work on two other inventions, the telegraph and the telephone. In 1877, Edison was working on a machine that would transcribe telegraphic messages through indentations on paper tape, which could later be sent over the telegraph repeatedly. This development led Edison to speculate that a telephone message could also be recorded in a similar fashion. He experimented with a diaphragm which had an embossing point and was held against rapidly-moving paraffin paper. The speaking vibrations made indentations in the paper. Edison later changed the paper to a metal cylinder with tin foil wrapped around it. The machine had two diaphragm-and-needle units, one for recording, and one for playback. When one would speak into a mouthpiece, the sound vibrations would be indented onto the cylinder by the recording needle in a vertical (or hill and dale) groove pattern. Edison gave a sketch of the machine to his mechanic, John Kruesi, to build, which Kruesi supposedly did within 30 hours. Edison immediately tested the machine by speaking the nursery rhyme into the mouthpiece, ‘Mary had a little lamb.' To his amazement, the machine played his words back to him.” http://memory.loc.gov/ammem/edhtml/edcyldr.html

What did Thomas Edison foresee the phonograph being used for?

For those of us involved in this paranormal “field”, I wonder where we'd be if it weren't for Edison or his inventions? And I wonder if Edison had any idea that his inventions would be so important in the future of Electronic Voice Phenomena and spirit communication in general? Edison had an interest in spirit communication and it is widely believed that before his death he was working on a type of telephone to the dead and other tools that would have been a great help to this field. And who knows? Maybe we're using new inventions from Edison today? Many mediums and researchers claim to have made contact with him over the years. Maybe he has passed all of this expertise onto mortal inventors, scientists, and inventors? 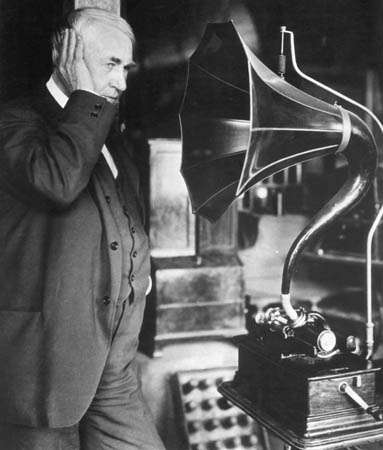 Would you like to listen to some Edison sound recordings?

In the first link below you can listen to some of the very first recordings, including the Mary Had a Little Lamb recording by Edison that is mentioned above.
http://www.archer2000.net/archervalerie/1900s/edison.html
http://www.nps.gov/edis/photosmultimedia/the-recording-archives.htm