The Woman In Black…

It's the kind of scary movie that I just love, and unfortunately they're never made anymore. There's no gore, no overly intense computer generated imagery (a pet peeve of mine), just an incredibly pimped out and abandoned mansion in the late 1800s that is just as spooky as you would expect it to be. Hammer Film Productions, from the UK (The Curse of Frankenstein, Dracula, The Mummy), makes a comeback to produce this film.  Their heyday was from the 1950s into the 70s. 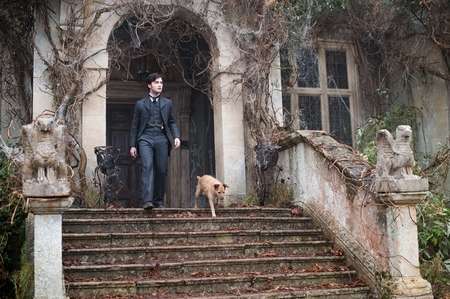 After seeing the trailer I knew I'd love this movie. But I had no idea that there were so many references to spiritualism, including a scene where Daniel Radcliffe's character notices an add in a newspaper mentioning a spiritualist and séances. I knew then that I was meant to see this movie. I've been reading a book about Kate and Maggie Fox, the sisters who are widely credited for starting the whole Spiritualism movement from the 1850s to the late 1800s. I blogged about them recently. Anyway, this is all from roughly the same time period.
There are several clips and trailers, but this one is my favorite. If you haven't seen the film I think you should! This might be a DVD purchase for me!