The Uninvited: The True Story of the Union Screaming House 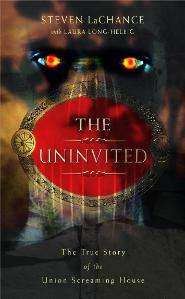 The Uninvited: The True Story of the Union Screaming House by Steven LaChance (2008), is about a man's experiences with a haunted house in a small Missouri town during a several year time period in the early 2000s. I was unfamiliar with Steven or the “Screaming House” in Union until this book showed up in an Amazon.com book search. Being from Missouri, I figured it was something I should definitely check out.
In the beginning, the book focuses a lot on Steven (the author), who is a hardworking single father struggling to make it with three children. After moving from one disappointing rental to another, they manage to find what seems to be a dream home for their family… and this is where the real story starts. I am a person that reads a lot of books that would keep most people up at night, but I don't usually have any issues. The activity that LaChance describes was enough to keep me from reading before bed. It does tend to be a little heavy on the demonic, and things like oppression and possession, but one thing I liked was that the author was really honest in describing those experiences and his opinions.
After reaching his limit of paranormal activity, the author finally moved his family out of the haunted home, but activity seemed to follow them, often in the form of nightmares. Fate also seemed to arrange for Steven to meet Helen, the next renter (or victim?) of the home. He felt the need to help her to find answers with the ongoing activity. In doing so, they formed a close relationship, and Steven ended up forming Missouri Paranormal Research (which I believe is now Paranormal Task Force), and the group seemed to spend an exhaustive amount of time investigating in the home. From there, the story focuses on Helen and the extreme experiences she goes through, including signs of possible oppression and possession, threatening both homicide and suicide, and even spending a short amount of time in a mental health facility. Steven seemed to talk himself through the thoughts that I was having while reading. Was she truly being affected somehow by some kind of demonic entity from the house, or was she purely having a psychological breakdown?
One thing is for sure. You won't be bored with the twists and turns in the story.
For Steven's website, click HERE. For a pictorial tour of the Union Screaming House, click HERE.


Author's bio from the book cover:

Steven LaChance (Missouri) is co-host, with Denice Jones, of the popular Internet radio show Haunted Survivor. He appeared in the documentary film Children of the Grave and his story was featured on The Discovery Channel's A Haunting. His experiences at the Union screaming house inspired him to form the Missouri Paranormal Research Society.

The Spirits of Ouija: Four Decades of Communication (Big Séance)

Vintage: A Ghost Story (for the gay teen in your life) (Big Séance)