There has been a lot of experimenting and evidence analysis lately… maybe too much. I needed a break. And so on a dreary, blustery fall day like today (which is my favorite, by the way)… a day that required me to put on the season's first hoodie… what better time is there to grab a blanket, light a candle, and watch an old black and white psychological horror movie? You may remember that this was the first movie on my list of Movies I Plan On Checking Out This Fall.
I'm not sure this 1961 British film perfectly fits into that psychological horror category. It also lacks the blood and gore of what I consider a “horror” film. I decided not to include the official trailer for the movie in this post, though it is certainly available on YouTube, because its style just doesn't seem to match the classy movie that I just watched.

The movie begins with a black screen and a creepy melody, “O Willow Waly”, which is sung in a cappella by a young child. Perfect, right?! I just knew I was going to love it. Much of the film is shot in beautiful outdoor garden-like settings, and the rest of the movie takes place in a beautiful large country estate (filmed on location at the Sheffield Park House in East Sussex, England). It really is beautiful to see on screen. And then, of course later, that same beauty creates the good old-fashioned spookiness that I love in a horror movie. No special effects needed.

From Wikipedia, here's a bit about the story…

Miss Giddens (Deborah Kerr) applies for a job as a governess. It is to be her first position, but the wealthy bachelor interviewing her (Michael Redgrave) is unconcerned with her lack of experience. He values his freedom to travel and socialise and unabashedly confesses that he has “no room, mentally or emotionally” for his niece and nephew, who were orphaned and left in his care as infants, and whom he keeps at Bly, his country estate. The previous governess, Miss Jessel, died suddenly less than a year ago. All he cares about is that Miss Giddens accept full responsibility for the children, never troubling him with whatever problems may arise.

Miss Giddens eventually discovers that the two children are being possessed by the spirits of the previous governess and the uncle's former valet.
Because the two children are supposedly possessed by spirits who were in love, this created some weirdness for me. In the movie there is talk of how these two spirits (while alive) would engage in sexual activity in clear view of the children. So now when the children act strangely or say in appropriate things, Miss Giddens begins to wonder just what the children know or what they saw before she took over as governess. At times, the young boy seems to be taken over by the spirit of the valet, and there is even an uncomfortable moment where he kisses his governess passionately. Of course, this weirdness is mild since the movie is over fifty years old… but I just thought I'd give you a heads up. 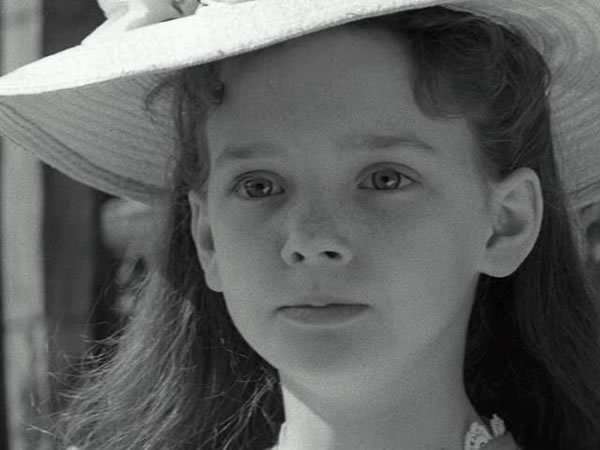 Below are two clips. The first clip is a scene that I think captures the style of most of the movie. I think it is beautifully shot. It's also the video I watched that made me realize I needed to see the film. I quickly ordered it on DVD. The second clip is possibly the creepiest scene from the film.
Enjoy!

Unfortunately, the first video no longer exists on YouTube.