I've read a lot on paranormal and spiritual topics, but for some reason most of the books I read avoid the topic of “table tipping”. Or, at least they don't get into the subject very deeply. Along with discussing séances, mediums, etc., the book I'm reading now (which is not necessarily spectacular) discusses table tipping a bit. If you've followed my Scole Experiment posts recently, you'll know that some of the major phenomena for them involved the table in the room. Apparently, in one sitting, the table levitated completely off the floor, turned on its side, and spun around like a fan. Can you imagine? It was recreated and dramatized in the introduction of the Scole documentary video I posted. 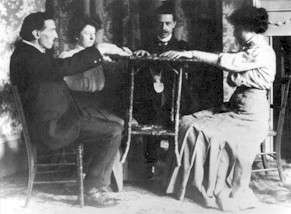 Can you spot the trickster in this photograph?

But table tipping has roots way before Scole. Beginning in the middle to late 1800s, table tipping was just one of the phenomena being experienced by the Fox sisters, most famous for spirit “rapping” and really introducing modern Spiritualism to the world. Along with some EVP (electronic voice phenomena), I tend to get a lot of rapping in my home. Table tipping sometimes happens in a séance, usually involves a medium, and requires all sitters to gently place hands (sometimes just finger tips) on the top of the table. Usually a smaller, lighter table, and made out of solid wood. The idea is that spirits use your energy to rock or tip the table, making it easy to communicate.
Of course, this form of spirit communication involves a lot of trust. All the sitters must be able to trust that their fellow sitters are not causing the rocking or tipping themselves. I think this is probably why the practice has a lot of skeptics.
I've never been involved in table tipping. Have you? Thoughts? Feelings?
Enjoy these videos (there are also many others online) and discuss.