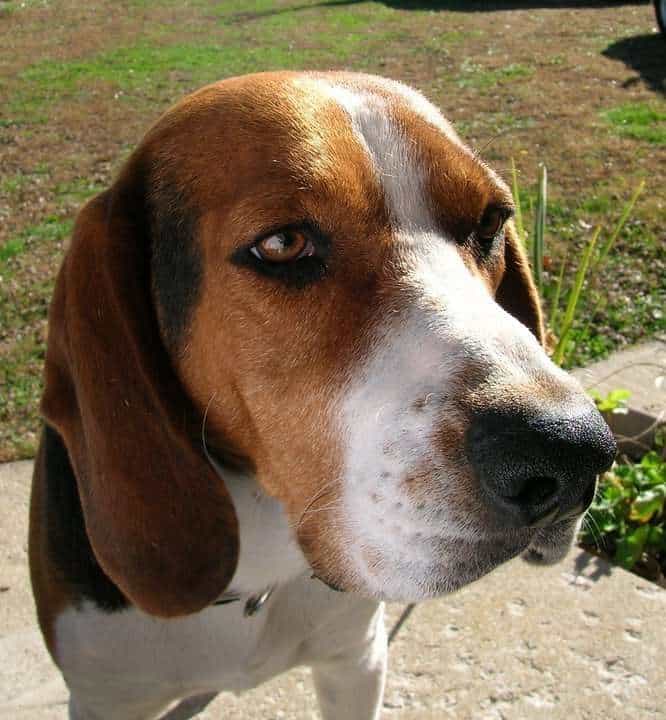 Spinner, this adorable and lovable, yet often skiddish country dog, is just one of several who have found and adopted my parents (specifically, my father) over the years. Spinner has always been known to love the nightlife, running all over the neighborhood, through the fields and the woods, and who knows where else. You'll be outside walking one of the inside dogs in the dark, and suddenly you hear the galloping of his long legs and the flapping of his ears off in the distance, which is honestly a bit startling! You just know he's coming for you, because it's time to play! During the day, he takes it easy and sleeps.
Spinner has a sad and rather frustrating story that led him to my dad. My sister knows the details better, but a local *cough cough A$$ H%!#* farmer ran Spinner off because he was so disgusted that he was “gun shy”, therefore he had no use for him. Scum. But now he runs free on his adventures and returns home for shelter and food. On a good day when I'm home in Lexington for a visit, usually when Meril is with me, he'll let me love all over him. Other days he'd rather keep his distance.
Spinner has always been a completely innocent soul, sometimes slow to trust, but that's understandable. He reminds me of a cartoon character, just goofy and awkward (and no, not THAT Goofy, or even the other famous beagle), but completely innocent. Just like humans that sometimes share the same personalities and qualities, Spinner is sometimes taken advantage of or bullied by “mean dogs”. An incident happened several weeks ago where he was ganged up on by two notorious four-legged neighborhood bullies. Spinner was left bloody and sore, and when my father tried to care for him he ran off. Shame? Embarrassment? Would he come back? I cried hearing about it over the phone and almost drove the three hours to see him. He returned, and dad managed to put him in a pin to heal and rest for as long as he could stand it. He's just not happy there. He has to run free. 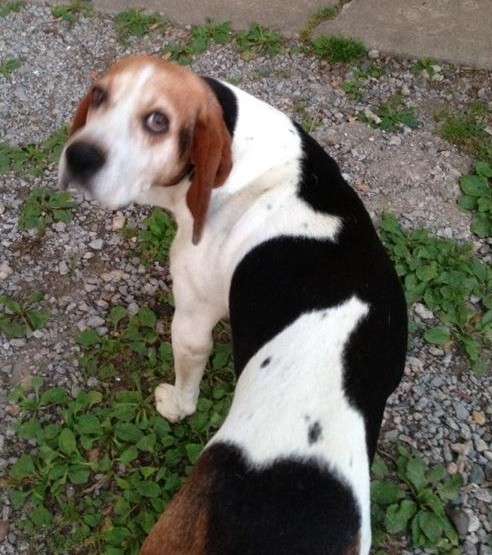 The wounds healed and things seemed to be back to normal, then last week I heard that Spinner was not his usual self. He was struggling to stay on his feet, making my dad wonder if these were the dreaded signs that he's seen too many times before. He put him back in the pin to keep an eye on him, but he didn't go far… couldn't go far. Dad reluctantly took him to the vet.
The doctor gave him some shots and mentioned wanting to keep Spinner over the weekend to keep an eye on him, just in case he bounced back from whatever this was. If not, it was understood that Monday could be a day where Spinner would be assisted across the Rainbow bridge. Updates over the weekend didn't sound promising. He seemed to be completely paralyzed other than his head. I was happy that my sister was able to visit him to give him company from a familiar face. She said his eyes lit up when they entered the room. How miserable of a weekend it must have been for him.
I shared Spinner's photo on my Facebook feed and asked that people keep him in their thoughts and prayers, and though he doesn't know many people on Facebook, he suddenly had several fans sending him love. But in my heart I didn't feel great about his recovery. When Monday morning arrived, I sent tons of energy and prayed, and tried to pass on a message that went a little like this: “Hey Spinner Dog! I love you and hope you're not in pain. If you're going to get up, and if you're able to, NOW IS THE TIME! Get up! And if you're not able to, just rest and it'll be okay.“
My sister left a voice mail while I was at school yesterday, and it left me in tears! Spinner was doing better and was due to go back home… and he did. I couldn't believe it!
When I called dad to get the story, I was blown away. Spinner apparently had some kind of “Coonhound Paralysis” that tends to be temporary. Dad intended on keeping him inside while he got better and gained strength. He took him outside with a leash (rrriiiiight) to get him some exercise, and Spinner broke away and ran around the house at lightning speed, around the lake, and out of sight! Dad, who was obviously shocked, was able to catch up with him later and put him back into the pin again. It was funny to hear dad cursing and calling him a “faker” over the phone… Ha! Spinner Dog just has to be free and do things his own way.
Proof of the power of positive thought and prayer? I'm not sure… but I feel bad that I didn't have more faith that he'd pull through.