Shirley MacLaine’s Out On a Limb… 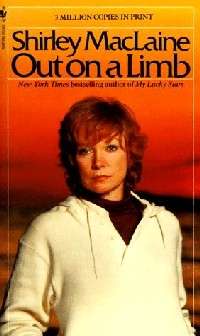 Shirley MacLaine has written several books, but the autobiographical Out On a Limb (1983) is the first book that really goes “out there” as she lets you follow her search for inner truth. If you not only go back a bit in time, but also think about the massive career that Shirley had built by this moment, it's not hard to understand that she had a lot to lose by “coming out” to the public about her enlightenment. It's not really a short read, and it's not light and fluffy either. But I suspect many Big Séance readers can relate to much of what is in this book.
There are a few initial chance meetings that introduce Shirley to topics like reincarnation, mediumship, and aliens/UFOs. I found it interesting to hear her talk about her hunger for learning and finding information through books. She couldn't stop reading and searching for answers. This is how I felt when I began what I've often called my “spiritual shift” several years ago. This blog has been a continuation of this shift. It took what seems like forever for Shirley to really accept some of these concepts. There were times she was downright skeptical and wouldn't just take one person's explanation or even one personal experience as proof. And the biggest moment that I could relate to happened after spending two and a half heavy and dramatic weeks in Peru with a friend and teacher. She became overwhelmed. The spiritual truths and learning was all too much and was happening so fast. I flagged this paragraph in the book.

“I spent the next few days walking and thinking. Sometimes David came with me, sometimes not. Sometimes I wanted to go home, back to America, back to the familiarity of my old world with its fast-paced involvement, its clanking relationships, its unrealistic romance, all the rushing with no seeming purpose–the events, the news, the arts, movies, hits, flops, sweat, hard work, black humor, competition, new fashions, profits, color TV, and success. I missed it all. I was used to it. I had survived in its colorful confusion, and I missed it. But I didn't want to be unfulfilled in it anymore either. I watched the woman with no teeth wash her clothes by stamping on them with her feet. They came out clean. The clothes, I mean. (Probably the feet, too.) That's what I wanted to do with my life… stamp on it until it came out clean. Could I go back to my old world now? Would I be two people? Was I more than one person anyway? I stopped and laughed right there. That was the whole lesson, wasn't it? I was all the people I had ever lived. I had probably been through versions of this brain drain more than a few times before.”

How many of us have experienced this? I know I did. I still do sometimes. Well according to her book, it didn't take long for her to snap out of the confusion. You might say that since then she's been one of the few Hollywood faces of the paranormal/spiritual. Her site has the following as a part of their mission.

“The objective of our center is to afford visitors of all ages the ability [to] explore and interact with the myriad of alternative views relating to Spirit, Mind, and Body. These are vast realities that range from the very human concerns of health, well being, aging, and alternative therapies, to universal topics of extraterrestrials, UFOs and phenomenon, to our delicate environment, to life after life, and the spiritual truths of the Divine that each of us is striving to connect with.”

For those in a younger generation that may only know her as playing the role of Martha Levinson on the hit PBS series Downton Abbey (AhhhhMAZING show!), below is Shirley's Oscar acceptance speech for the amazing film, Terms of Endearment in 1984, a year after Out On a Limb was released. In it, she makes a joke about past lives, but she also talks about there being no such thing as accidents and that we all manifest what we want. I love it and I've watched it several times. Just look at the amazing talents and personalities that are shown. The ending of her speech is classic. This video started me out on one of those endless labyrinths of addictive videos that kept me from sleeping. I'm only slightly embarrassed to admit that this same all-night obsession has happened in the past with Esther Williams and Gloria Swanson. Anyway, view at your own risk.

Unfortunately, Shirley has most recently been in the news after her daughter, Sachi Parker, wrote and released a book Lucky Me: My Life With — and Without — My Mom, Shirley MacLaine. In the book, Parker apparently claims that Shirley was an absentee mom.