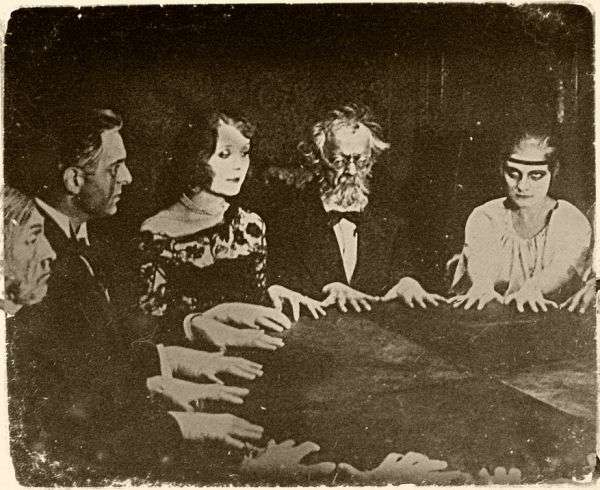 So this is getting close to my 60th post, and considering the name of my blog, I suppose it's about time I hit on the concept of a séance. And actually, it was brought up by one of my new friends who is a frequent reader and commenter on this blog. When I think of a séance, I think of the atmosphere. I picture a beautiful, but mysterious, Victorian dining room with candles (another obsession of mine), anxious sitters, and a flamboyant spiritualist reaching out to communicate with the dead. I must confess, I think I was introduced to the concept of a séance in a segment of The Bloodhound Gang, which was like a miniature mystery series that was a part of the 1980s PBS children's series, 3-2-1 Contact. Anybody remember? I even had a subscription to the 3-2-1 Contact magazines for a while and have probably seen every episode from all eight seasons. Don't tempt me to sing the theme song (or even The Bloodhound Gang theme for that matter)… because I will. I can't be exactly sure that's where I saw my first séance, but that's where my childhood memory is taking me back to.

Now days, many modern spiritualists prefer to call this event a “spirit circle” (possibly because of some kind of unfair stigma attached to the old name), and many people form groups that meet regularly to communicate with spirits of loved ones, guides, teachers, angels, etc, to learn about life and the other side. There are groups all over and websites where you can locate a circle near you. Several times on this blog I've expressed my interest in starting a similar group and documenting some of those experiences here.  I'm working on it. Besides being fun and interesting, I think it would be a huge learning experience. Many people have the opinion that you must have a medium in order to have one. Having a medium present is probably a major bonus, but considering I experience spirit communication through EVP (and more recently, several “rapping” experiences) on a regular basis, I think spiritual people with the same goals in mind can probably successfully hold séances on their own as well. And most of us would be in agreement that we all possess different levels of a variety of psychic abilities (although I don't brag about mine). Of course, I say these things having not experienced one as of yet. I have,  however, read tons of books on spirit communication and a few on tonight's topic. I much prefer the term “séance”, though… it sounds way cooler and less new age/hippy. A glass of wheatgrass juice on the table next to the candle doesn't fit my vision. 🙂

I have been asked about my thoughts on séances “conjuring” spirits and whether it was appropriate. There are so many things that paranormal or spiritual folks claim they know (me included), and science refuting everything paranormal simply because it can't be handled or tested gets on my nerves just as much as it does anyone else, but NO ONE knows any of these answers for sure… no one. I hear and read this from Randall Keller all the time. It's true. However, it is my opinion that all spirits have free will, for the most part. I don't believe that just because someone requests the presence or energy of a particular spirit that they have no other choice but to be dragged down to the party. It's also a common belief that spirits (especially the higher level ones) may just have the ability to bilocate, or be in more than one location at a time. I don't believe that requesting the presence of a wise teacher or guide prevents them from doing any of the more important activities (whatever those might be) on the other side. If they're busy saving the world (or the other side), I'm fairly certain they'd just ignore us and leave us nerds waiting at the table. I do, however, believe in having manors and behaving respectfully when participating in spirit communication. Really, my EVP sessions and experiments are a form of a séance, only usually I'm the only living one present (unless you count my 4-legged son, Meril).  When paranormal investigators focus on an EVP session, or anything similar, they're really having a form of a séance as well. Anytime I've attempted spirit communication, I ask my guides (or anyone present) to assist in inviting the presence and energy of whoever I'm interested in communicating with. I will sometimes ask if they are “available” to communicate with me. I don't see anything wrong with that. Since the great majority of the time I don't have any knowledge of those specifically invited spirits being present with me, I doubt they can be “conjured”. I don't think we're that powerful. I also don't think there is anything wrong with asking, providing you know the magic words (“please” and “thank you”).
So next time you attempt spirit communication of any kind, mind your manors. Who wants to hang out and socialize with mean or bossy peeps? Aaaand… at least light one candle… even if the only thing it does is create a cooler atmosphere. After all, there are accounts of spirits claiming the flame and the atmosphere really do help. That's all the excuse I need. 🙂