CCTV, or closed-circuit television cameras, have become cheaper and more accessible in the last several years, allowing many homeowners and businesses to use them for security. For the same reason, paranormal investigators often use them as well. They're the same cameras that are in the hallways of my school. They're found in the woods now too, though hunters like to call them “game cams”. (Aliens and Bigfoot have been caught several times on these game cams… if you didn't already know.) You can even get them at Walmart. The video is recorded continuously onto a DVR and is usually easily searched if you know the approximate date or time you're interested in. 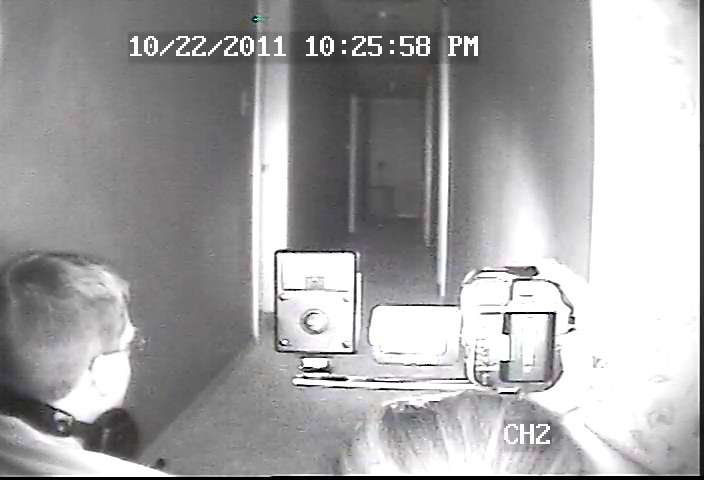 One of our CCTV “DVR” screen shots from the MOSS investigation of a residence back in 2011.

The combination of CCTV and the popularity of the paranormal has provided a great opportunity for business owners to play ghost hunter, as they capture and publicly disclose their “ghosts”, often taking advantage of the publicity and hype that comes with it.
When you see these captures on video, you don't often get much background information on the location. No one is there to answer your curious questions. What was behind the camera? Was anyone there at the time? (There are many other questions I could think of.) Now days you have to wonder if the video was doctored, embellished, faked, etc. Was it a publicity stunt for an upcoming “found footage” movie? Even so, they can be fascinating and appear very real… and if you're like me, deep down you really WANT them to be authentic evidence of the paranormal.


The Ghost of Ye Olde Man and Scythe

The most recent example was brought to my attention by Ghostsnghouls.com. Watch it and then find my commentary below.
[youtube http://www.youtube.com/watch?v=rZ5XyEdEqIk?rel=0]
Supposedly there are no windows behind the camera, making the flickering and lighting changes seem very mysterious. And the flicker just before the blackout seems a bit too perfect for me. I wish I had several pictures of this room in the daylight so that I could get a feel for the whole place. And does it all seem just a little Hollywooded up to you? It's only missing an edgy score by Hans Zimmer, am I right? It's definitely fascinating video though. I bet this pub has named a nicely priced drink after this “ghost” as well.

…is also from a pub (why always a pub??) and was captured several years ago in Britain. I really really REALLY REALLY wanted this one to be real. Like a lot of these videos, this is almost guaranteed to be evidence of a lack of cleaning up high in corners of the rooms where these cameras are mounted. I could find several cobwebs in a few corners of this room right now if I wanted to. Watch closely and you can identify this ghost as a fly or some other kind of insect. Often, a simple cobweb will cause excitement and claims of paranormal activity.
[youtube http://www.youtube.com/watch?v=gyHkw9KZnGg?rel=0]
Don't you just love it? You had the story worked up in your mind, didn't you? The centuries old pub has an old employee that loved the place so much that they help clean up overnight. Either that or it's a residual haunting and it's just a normal night at work, serving beer and cleaning tables. Right? Please oh please oh please. Having a brain ruins all the fun, doesn't it?

I've never claimed to be an expert in video when it comes to evidence, but I still say that video is the least likely place to capture true evidence of the paranormal. It's funny that so many people put so much focus and emphasis on that very rare and heavily contested video evidence. Of course, as the reporter in the video stated (while taking the easy way out and not mentioning possible logical explanations… ahem… like flies), “Hey. You never know.”

Belvoir Winery/Odd Fellows Home: Ghosts can do that? The Evidence… sort of… (Big Séance)