I purchased this book after hearing the author, Rosemary Ellen Guiley, interviewed on The Paranormal Podcast with Jim Harold. For a while now I've wanted to find a great book solely on the topic of the Ouija board, or talking boards in general. I've heard her interviewed a few times and I just love her. Plus, I've read and enjoyed another book by her as well, so I knew it was the book for me.
Rosemary (along with Rick Fisher) mention in the introduction of the book that they've had no negative experiences with the Ouija. They are convinced it is a “neutral tool” for spirit communication. After reading this introduction I was convinced I was ready to give it a try. After all, as a paranormal investigator and the writer of a blog called The Big Séance, it is probably something I should have some experience with. Then I read on and changed my mind over and over as I read the rest of the book. You see, much of the book is a collection of recounted experiences and true stories of different talking boards going back to 1886. Much of the earlier experiences with the Ouija board are pretty benign, since it was intended for lighthearted entertainment purposes. But most of the more modern stories are overly dramatic and filled with evil activity. The authors attribute this to Hollywood.

I really really really wanted to come away with full signed permission from the author to give the Ouija a try, but most of the stories made me wonder why I ever wanted to. At the same time, I understand that in this day and age a book about nice and fluffy, positive experiences with a Ouija board is going to go nowhere. So, after finishing the book I came away with several things. 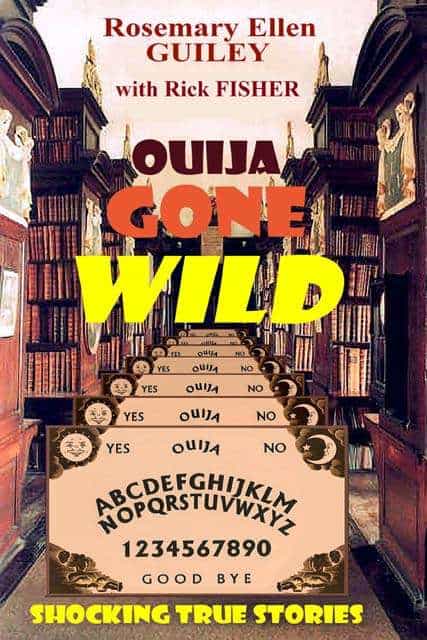 Keeping in mind that I haven't had that Ouija experience yet, I still tend to believe that using a Ouija board (or any other talking board) shouldn't be any different from any other form of spirit communication, which is a topic that I've studied quite a bit in the last few years. As a paranormal investigator and researcher (I hope I'm allowed to refer to myself as this), I've experimented with several forms of spirit communication, many times successfully. I've always experimented in an atmosphere of respect and seriousness. At no time have I felt that I was in harm's way or felt that I was in danger of being possessed or influenced in any way. I do believe that the Ouija board is a tool that I'll try soon. For a few different reasons, I think I need to try this on my own. I just think it has to be the right time and place. And when that happens, you know you'll be the first to know!

From the back cover of the book as well as Guiley's website.

For more than a century, simple divination devices called “talking boards” have captivated millions of people curious about contacting the spirit world. The most famous is the Ouija, whose trademarked name has become synonymous with all boards. Ouija messages have inspired writers, artists, and musicians, and have played a part in murder, suicide, possession, treasure hunting, marriage, divorce and bizarre behavior.Authors Rosemary Ellen Guiley and Rick Fisher provide a detailed examination of the Ouija. They debunk myths and discuss how horror films have influenced popular opinion.
Ouija Gone Wild features dozens of true stories collected over decades, many told in print for the first time., including tales of unexpected terror:
“She realized she had a problem when an aggressive entity turned the planchette into a sex toy and sent it slithering up her thigh…”
“I glanced over at the heat vent and what I saw scared me so much I dove off of the chair and refused to touch this ‘so called game’ again. I saw two red eyes staring back at me through the grates…”
“Suddenly I was sucker punched in my stomach. The force of the blow made me slam face-forward onto the table. Clutching my stomach, I took my hand off the planchette…”