My Ouija Séance on All Hallows Eve 2014 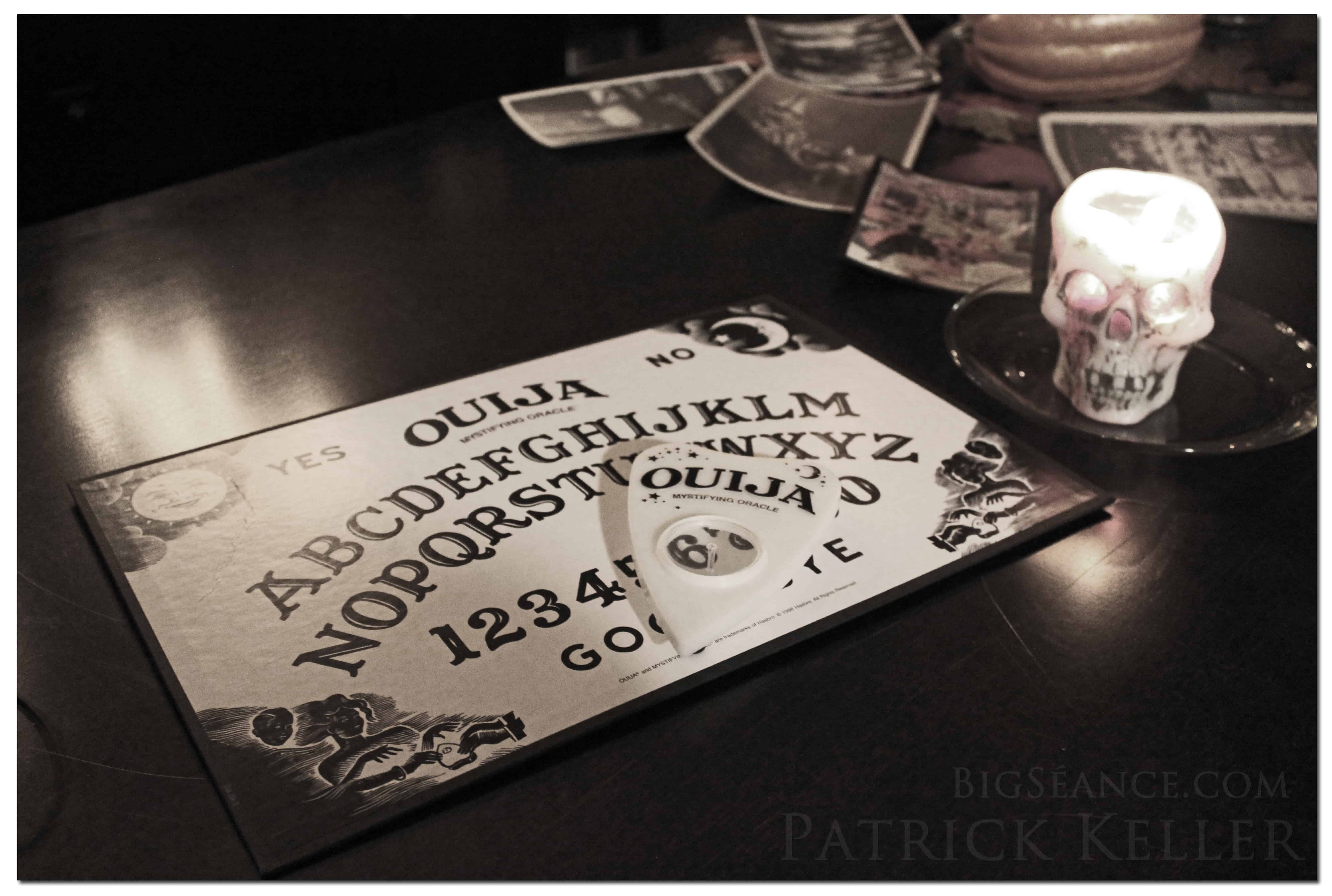 You may be familiar with my Annual Thanksgiving Ouija sessions. This year Karen A. Dahlman encouraged me to have one on Halloween, and so I did. I decided to call this one a Ouija Séance, because well… it sounds cooler.
My planchette partner was my mother. I was so very lucky to have them visiting us over the Halloween weekend. It was really nice, and I wish we could have extended it for several more days.
In this post, I will share with you a brief report along with some audio artifacts from the séance.

It was such an unseasonably windy and cold night for trick-or-treating, but along with the neighbors, we did our usual “schtick” out on the front sidewalk. I was sure that we'd have a much bigger turnout this year with it being Friday and all, but I think the cold kept many of the kiddies in… or it at least kept them from being out too late, unless your costume involved a winter coat, ski mask, and gloves. But my hot apple cider was a bigger hit than ever. I always offer it to the “big people” who accompany most of the little costumed goblins. (I even had one family show up and say “We remember your hot apple cider from last year! We were hoping you'd be out here again!”) Thanks to the neighbors' fire pit, we managed to stay warm and enjoy ourselves for most of the evening!
Oh yeah… and my Halloween window dressings were a big hit this year too! I think we'll use them again next year! 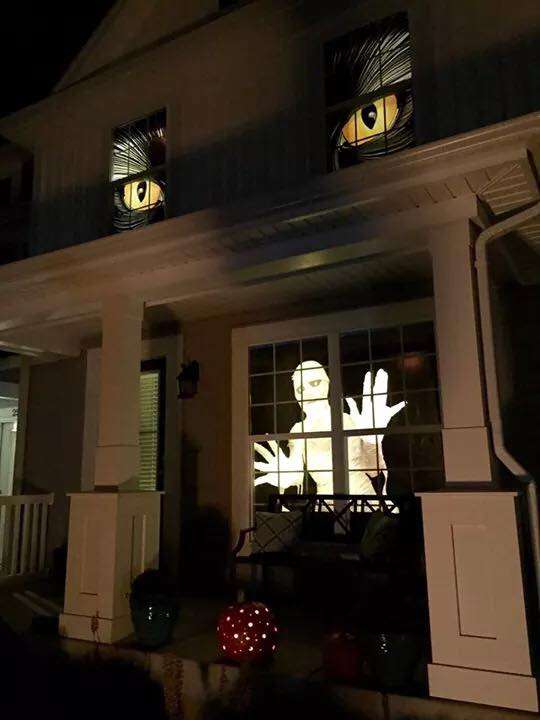 I was very tired from an incredibly crazy week and busy night, and my mom was tired from being on the road, but once we were sure the trick-or-treaters had given up, and after we had the chance to watch the original 1978 version of Halloween, we began our séance shortly after midnight.

The Ouija Séance… just call me the Spirit Rapper Whisperer…

Our séance began after the rest of the house was asleep and bundled in their beds upstairs. All the candles on the Halloween Altar were lit, and we sat with the board, which was surrounded by many of the vintage Halloween cards and photos. I recorded our session with a digital audio recorder, and was also prepared with the spirit box that I got from Stephen Hill.
We opened the séance by clearly stating our intentions and having a moment of silence for prayer/meditation. We discovered fairly quickly that we'd have to cut the silence short to keep from falling asleep. (Seriously… I was nodding off.)
Within the first 5 minutes, we were hearing many knocks and pops. I acknowledged that the water line to the fridge (for the ice maker) was making a few noises, and it was clearly our first really cold and windy night of the year. But the heat was not on, and other than it being Halloween and having two extra guests in the house, nothing else was out of the ordinary in our immediate surroundings. I have never before noticed or heard so many loud knocks and pops in the lower level of our home in such a short time. I really want to be able to explain them, but the curious timing of the knocks (almost every one happened after a question, as if in response) combined with how loud they were, makes them really hard to ignore. I don't know why I always seem to be the Spirit Rapping Whisperer, but I'll let you be the judge on what exactly this is.

A few audio artifacts of the knocking/rapping:

4 minutes and 24 seconds into the séance

11 minutes into the séance

13 minutes and 5 seconds into the séance 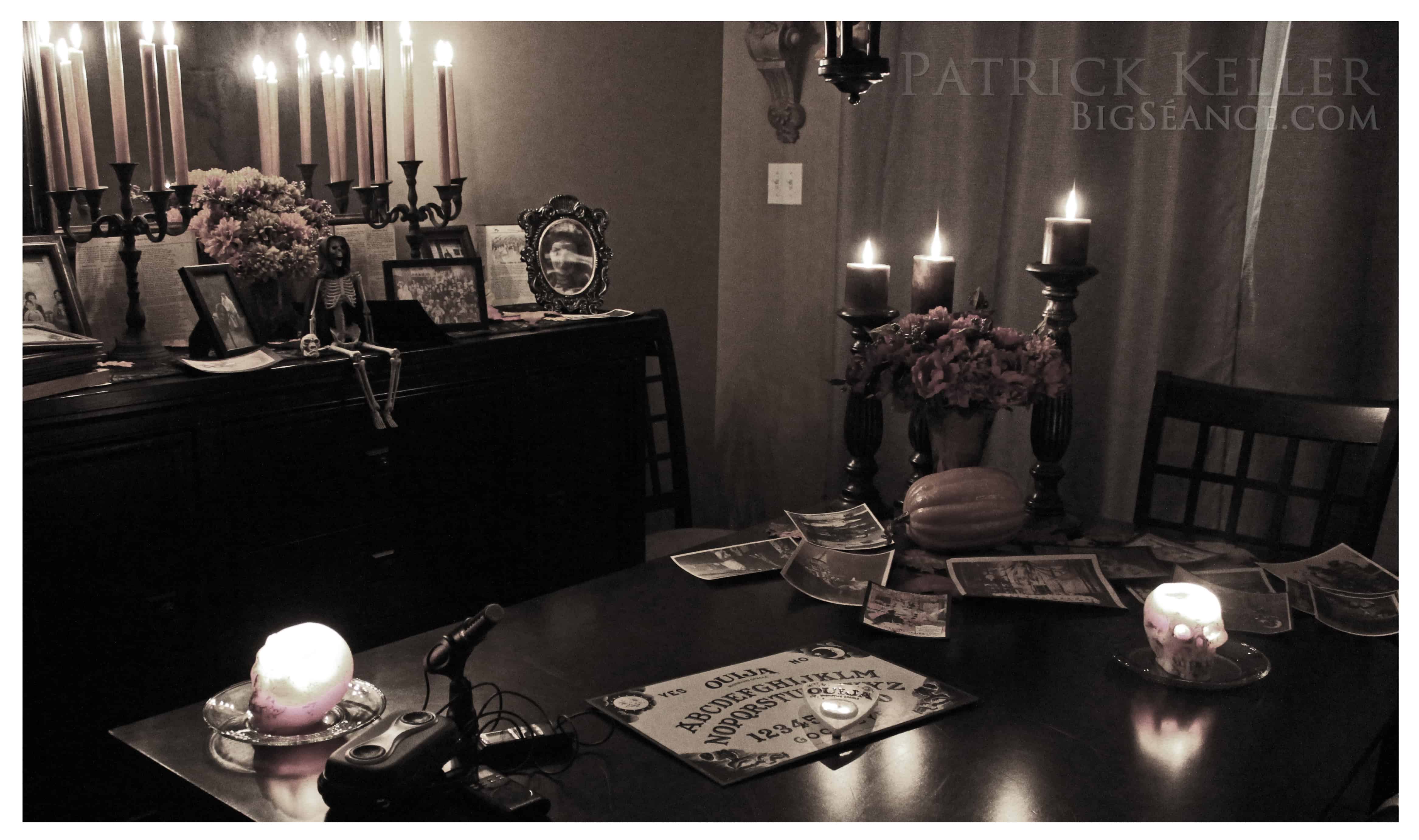 Then we turned on the Spirit Box

I don't know that I can make a guess as to what any of these possible messages say. All I know is that I don't typically flag too many interesting spirit box artifacts, especially those recorded in my own home. Most of the voices in the audio artifacts below seem to be the same voice that crosses over several to many frequencies or stations. That makes it significant in my book. I was sweeping the AM frequencies.


20 minutes and 27 seconds into the séance
I had just asked, “What is today?”
Original Audio with no enhancements

Noise removal, amplification, and slowed down


20 minutes and 49 seconds into the séance
I had just asked, “Do I know you?”
Original Audio with no enhancements


21 minutes and 43 seconds into the séance
I had just asked, “What am I touching right now?” (Hands were on the planchette/Ouija board.)
Original Audio with no enhancements

Noise removal, amplification, and slowed down 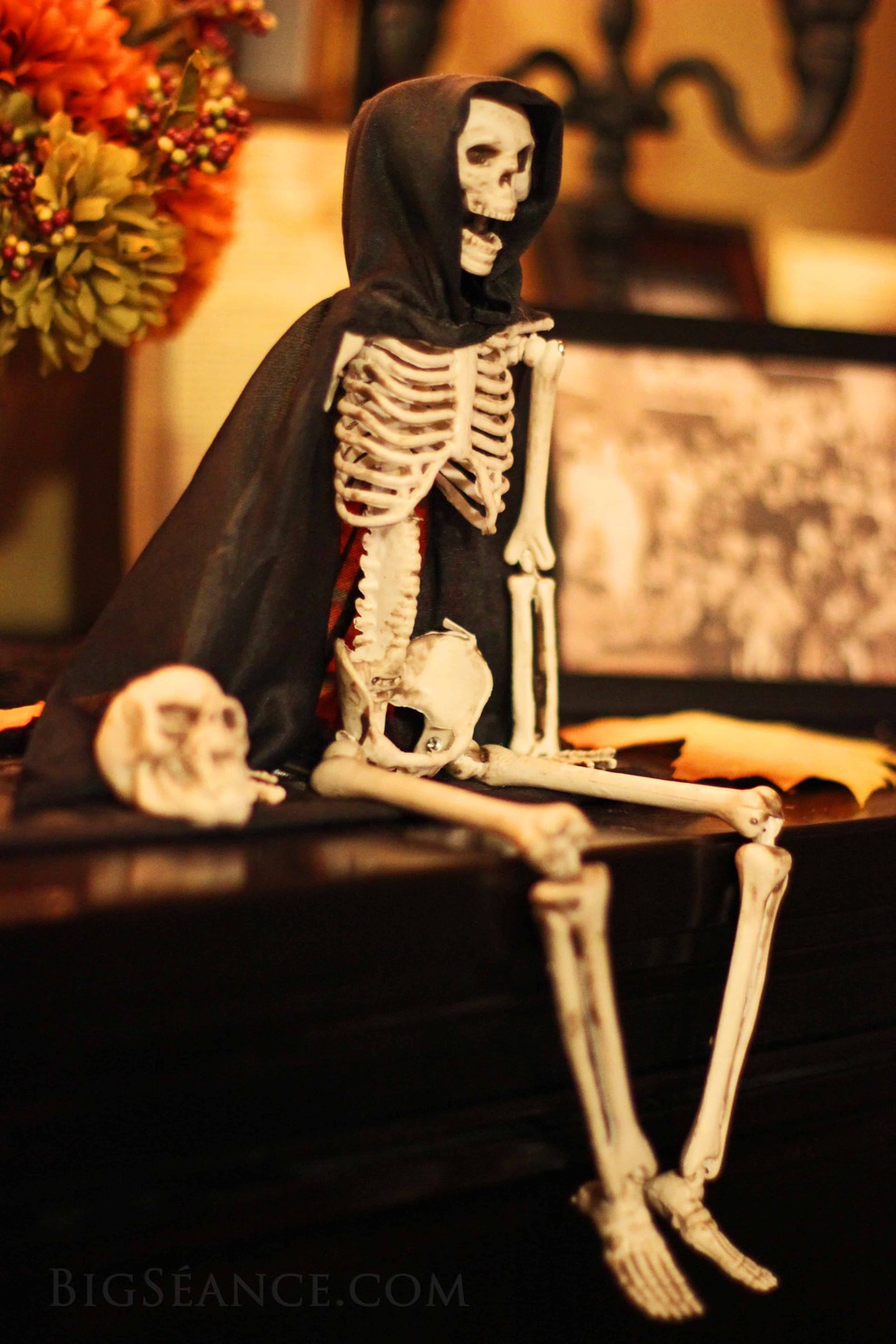 One other interesting detail is that at 20 minutes and 27 seconds into the séance, the little skeleton man that was sitting up in the center of the buffet/Halloween Altar, fell over. I was sitting in a chair directly in front of him with my back facing him. My mom watched it fall. Paranormal? I'm not sure. It was probably a couple of inches away from the back of my chair, but I wasn't doing much moving around.
When we stopped after 28 minutes, it was because I was falling asleep. Once again, I must point out that we experienced no movement or activity coming directly from the Ouija board. This has been the case for every Ouija session I've had in the last three years or so.

Did you find this post interesting? You may want to check out some of my other Ouija posts.

Spirits of Ouija with Karen A. Dahlman – The Big Séance Podcast #5
Why I pushed pause on EVP and Ouija, and why it's time to get going again!
Fear and Spirit Communication
Thanksgiving Ouija Session 2013