My last post about Scole discussed creative energy, music and vibrations, and light. Here is my final post about my thoughts on The Scole Experiment: Scientific Evidence for Life After Death by Grant and Jane Solomon. 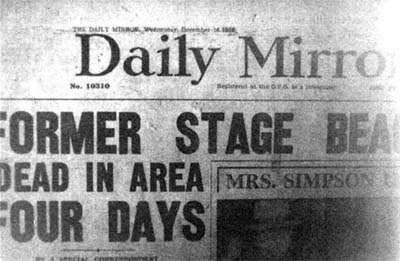 Photograph from 28 February 1994 of the front page of the ‘Daily Mirror', 16 December 1936. A copy of the original was obtained. It was almost identical to the photograph, with some minor differences which indicated it might have been from another edition on the same day. The newspaper was tested and proved to be genuine wartime paper. (Caption taken from the book) This showed up on sealed photographic film after a sitting. 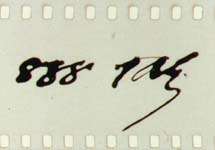 During a session, instructions for building a Germanium receptor (for better communication) manifested on sealed photographic film. This signature appeared at the end and is thought to be that of Thomas Edison, since compared to existing documents, his signature from life seems to be identical.

All of the color photos of phenomena and apports that are included in the book can be found on the Scole Experimental Group's page, or you can click on the photos above.

Wisdom from the spirit team…

The spirit team answered many of the Scole group's questions, which are included in the book. Here are some of the shorter question/answers that I find interesting.
I've always found it interesting how many people insist on there being a heaven and a hell, angels, devil, demons, dark side, etc. My current opinion is that it's all nonsense, but I'm always open to learning and changing my opinions. It felt good to read this first question/answer. Is the spirit team saying there's no evil outside of us? No hell? No devil?

Is there a negative side that fights this very positive energy?
No. It is man in his ignorance that causes problems. If man lives his life without aspiring to a spiritual awareness, he lives in ignorance. Ignorance breeds negativity and negative thoughts create a negative force as, in a similar way, positive thinking creates a positive force, so we have to work on the negative forces. Not, however, those outside of man, but those within man.
Do the Akashic Records exist and can we have access to them?
It is true to say that much information is stored in other realms and spheres. But again, perhaps not as much as you are led to believe. Some of the records are accessible to higher beings. There are also some on Earth who claim to have access to them, but I do not know if this is true.

As always, any thoughts?