Halloween Memories and Nostalgia from This Generation X-er 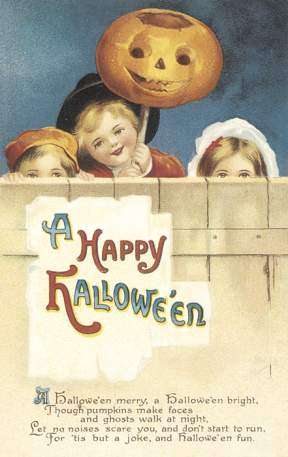 From the moment there was a hint of fall in the air, I have been reminiscing and thinking about Halloweens growing up. Today I decided to type aloud just some of the memories and thoughts that come to mind. I bet those of you who grew up in the 70s and 80s have similar memories. Go ahead. Climb on into my Delorean and let's travel back… back into time…

…to a time where Halloween meant witches with brooms, black cats, skeletons, and jack-o-lanterns with basic triangle eyes and jagged teeth. There was nothing more exciting than seeing your classroom teacher get out a big stash of black, white, and orange construction paper for craft time!
Remember scarecrows? You don't see those guys much anymore. Maybe it was just a country thing. They were fun to make, but it was lots of itchy and scratchy work. I remember making a few with my parents and raiding my dad's closet and drawers for just the right look. 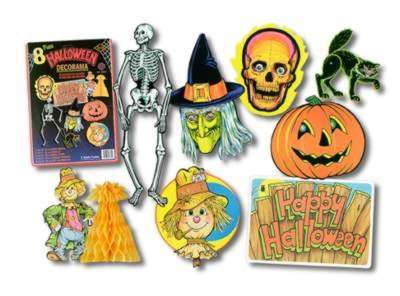 This was the first set of Halloween cutout decorations that we had that I remember. You can see the witch and the scarecrow centerpiece. Those were my favorites!

I remember getting so excited to go down to the basement for the box of decorations. Some 1970s cardboard cutouts for the windows were all it took. My favorite was the witch. She was so creepy. I also very much remember the honeycomb scarecrow centerpiece that we'd keep in the middle of the dinner table. I'm surprised it lasted as long as it did. Then there was the giant skeleton with movable parts. My sister remembers the black cat that had similar movable appendages. Lately I've made several Google searches for vintage Halloween nostalgia, and when you search for decorations, I recognize almost every generation of the more popular cutouts and can tell you where I remember them from. Some of them hung in teacher classrooms.  When I see a lot of popular Halloween decorations now, like the orange and purple strings of lights (that just scream Christmas to me) and the noisy and obnoxious blow up contraptions, I just don't understand them. But this is probably just another one of those signs of getting older and less hip. I wish they would reproduce some of the more classic decorations like they used to. Many of the popular cutouts from the 1980s were apparently reprints from the 1960s. I will say that there is one trend in the last few years that I've been seeing in the stores that I definitely like. Everything is glittery and sparkly now! Yes, please! I would have LOVED a glittery orange pumpkin as a kid! Oh my gosh… memories of Elmer's glue and glitter… don't get me started… 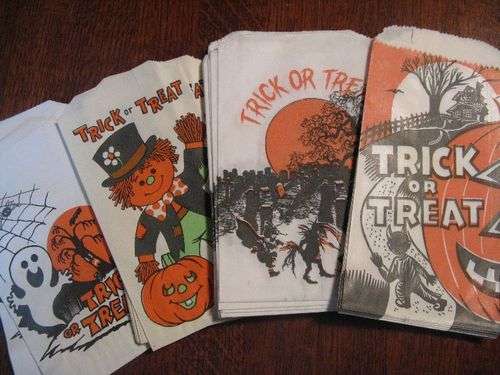 Did you have classroom parties thrown by the room mothers? There was always punch, games (including the one where you have to sit on the balloon to pop it… I HATED that one), and treats tied up in those paper treat bags. By the time my younger sister went through school, they were afraid to call them “Halloween parties” and for a time they referred to them as “pumpkin parties”. Silly.
I can also remember the Christian versions of these treat bags that we were given at church. I'm not sure what Bible verse would be appropriate, but they always included one. People were encouraged to use those on Halloween, just in case anyone thought you were a devil worshiper because you were celebrating such a fun holiday. Even as a child and as a good boy, I can remember thinking “yeah, right!” and passing up the opportunity to take the Bible thumper bags. Of course, the Christian treat bags weren't a big deal, considering a grandmother of mine, who was a strict Jehova's Witness, lived a few houses down. She would preach about how horrible Halloween (or most holidays, for that matter) was, and I remember feeling pressured by her to not celebrate it. I loved her, but Halloween was one of those awkward times for that part of the family.
Speaking of treats, I can almost guarantee that at some point in time, all of us were given a Tootsie Roll Pop with a white tissue wrapped over the top and tied with yarn, am I right? Mmmm… candy corn. When you went trick-or-treating, did you love or hate the popcorn ball? I didn't get too excited about anything that was homemade, and sweet tarts and anything with marshmallow were always what I had left from my loot in February or March before I would decide to offer the rest to someone else. 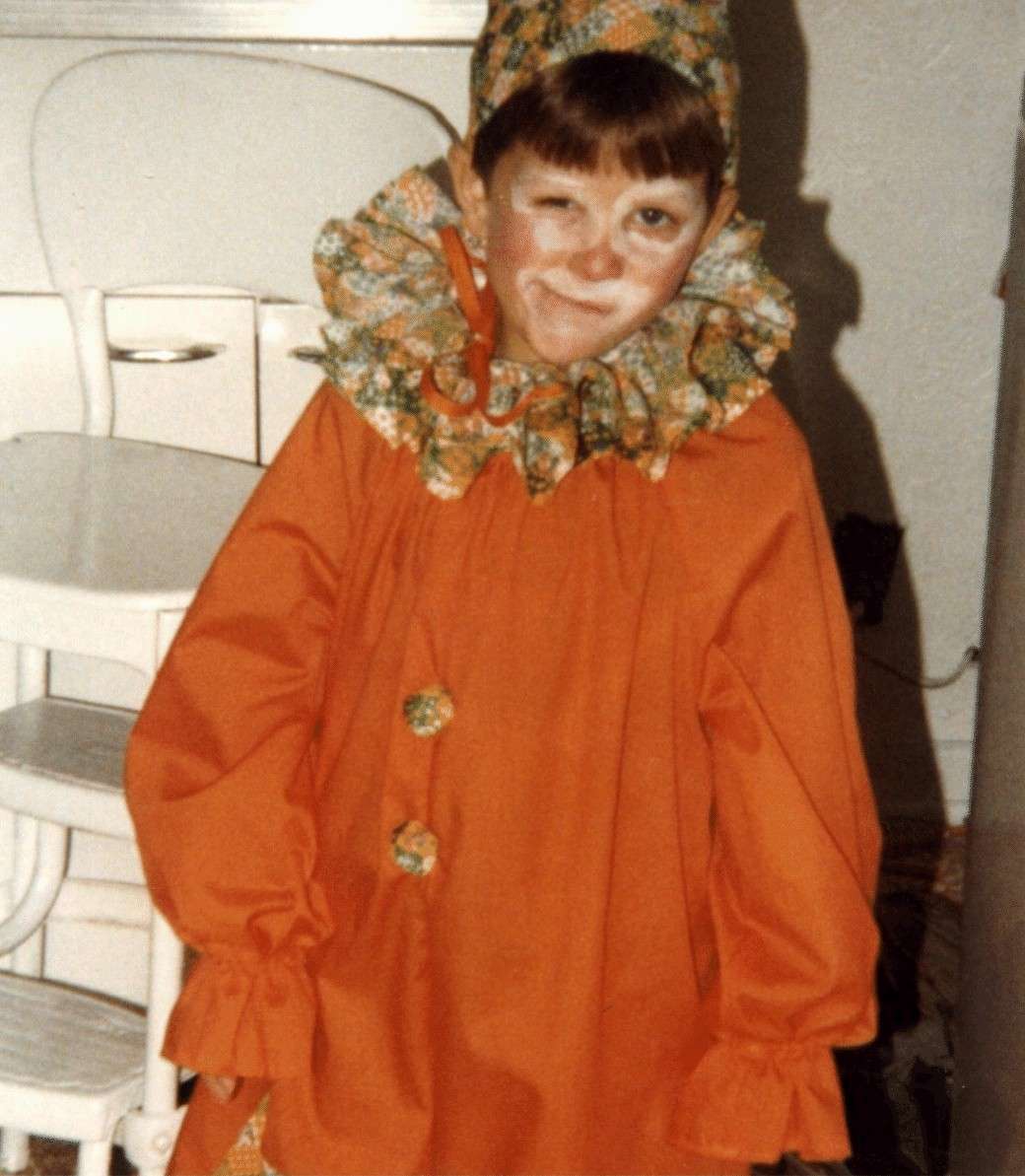 A Halloween clown. I was a clown for a few years since the costume was so big. My Grandma, a master seamstress, did a great job at keeping me in costumes!

Actually, trick-or-treating wasn't something that I took part in for very long, and my sister actually hated it. For a few years, my parents would take me and my little sister (once she was in the picture) to the homes of family members and close friends. We'd show off our costumes, hop back in the car, and head off to the next destination before going back home to catch remaining trick-or-treaters at our own house. And actually, handing out the treats to the few visitors we did have was way more fun, in my opinion. When I was six we moved away from town and out into the country, so for me the traditional neighborhood trick-or-treating wasn't a big thing. I remember always hearing my friends at school talk about it though, and we'd see ghosts and goblins lurking all over town when we were in the car driving from one place to the next. I'm not sure I would have ever walked up to a stranger's house for candy. I'm sure this is due in part to the warnings of things like razors in apples and poison in candy. Those things never happened, of course, but I remember the warnings that were popular in those days. 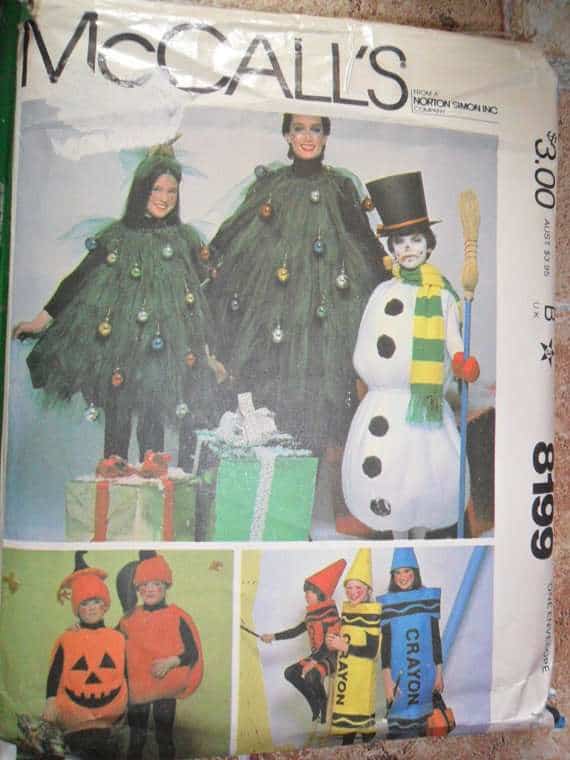 I can't believe I found a photo of the same pattern kit I used to obsess over at my grandma's fabric shop!

And costumes were different in those days. Another grandmother of mine owned a fabric shop when I was young and I would “help” her clean and organize. I loved it! I remember being very interested in the McCall's costume patterns, specifically the one pictured on the right! (I can't believe I found a photo!) Do you remember how cool it was to pick out a make-up kit with just three basic colors? Just put some plastic vampire teeth in your mouth and it will make up for how cheap the make-up looked. No vampire teeth? That's okay. Just stick some black wax on a few of your teeth and go as a “hobo”. Remember when dressing up as a hobo for Halloween was popular? Why did we do that? Weird. Speaking of weird, there are certain smells–like duct tape, for example–that instantly transport me back to the smell of a Halloween mask. I've heard others agree with me on this one, so I can't be THAT weird.
I'm not sure when it started or even if it was meant to be a tradition, but we usually had either chili or potato soup for dinner on Halloween. There was a year where my father somehow ended up with orange potato soup because of something weird that happened with the carrots that he added to the mix. I remember convincing my parents to let me add food coloring to the soup years later to truly make it orange. We'd listen to Monster Mash or even my favorite spooky sound effects “tape” (still have it) while setting the table for dinner. Now as an adult, I usually try to carry out the Halloween chili tradition.
Now we live in a large suburban neighborhood, and I can't even get home from work before they're knocking on the door in daylight, so I make my chili the night before. We sit out front with a few decorations, candles, tiki torches, a big bowl of treats, and plenty of hot apple cider for anyone who wants it. 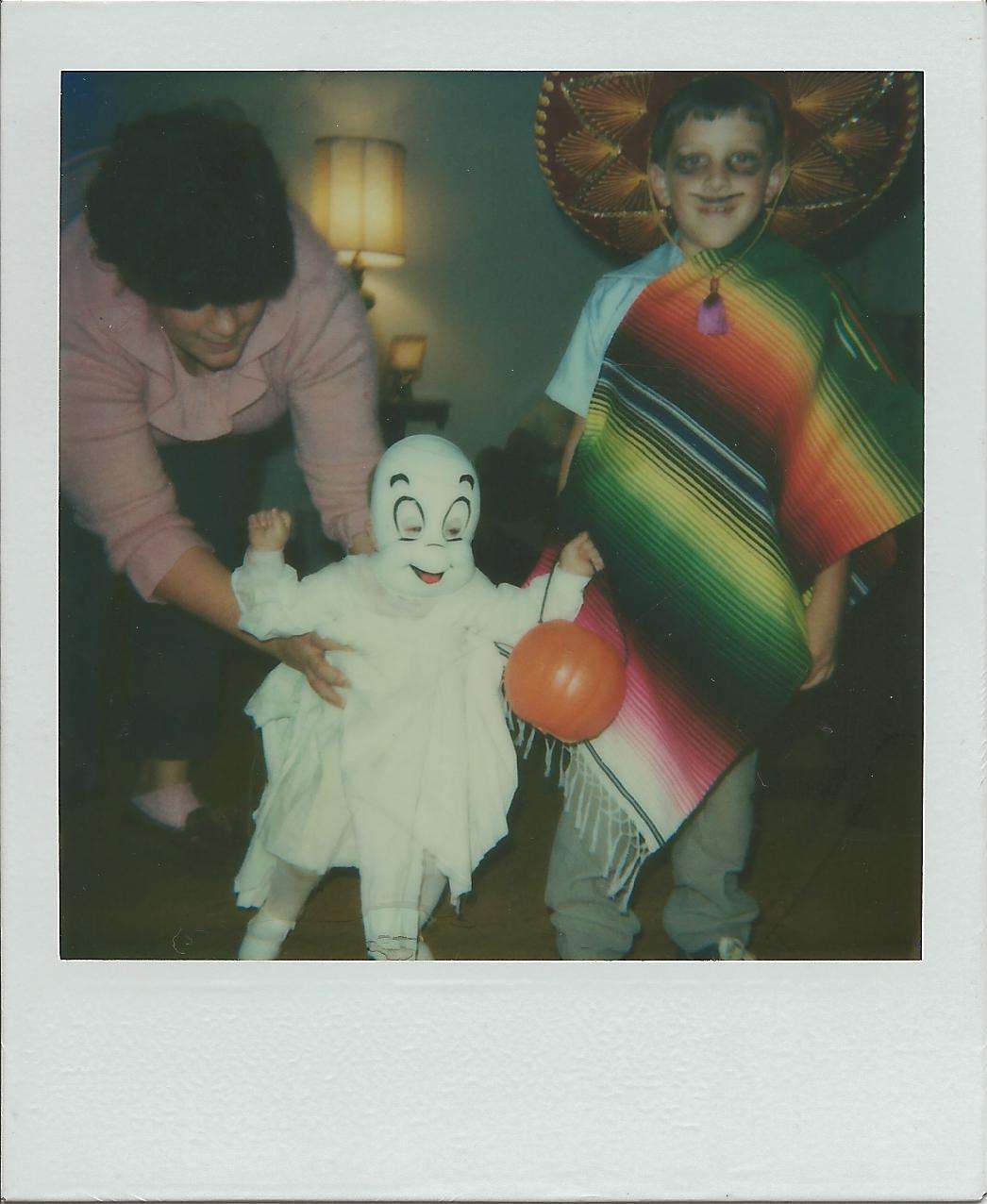 I love this photo. My sister was Casper and this was her first (and probably last) Halloween trick-or-treat experience. As my mom explained on the back of this photo, “Patrick is a Mexican.” Don't ask…

I'm sure as soon as I publish this I'm going to think of about 50 things I forgot to include, but then again only four of you probably made it this far into my reminiscing… and thank you for that!
Please feel free to comment and share your nostalgia or Halloween memories and traditions!