EVP Experiment: Down but Not Giving Up! Plus…Ouija Board News…

It has definitely been quiet in the last several days. I'd be lying if I said I wasn't bummed or disappointed. For the most part I have been sticking to the same method and processes from Day 1… however, I've changed or tweaked a few things as I've gone along to attempt to help entities more successfully communicate. I've also added a few unplanned, less formal recording sessions in addition to the official daily recording.
Yes, I've worked with and recorded EVPs before… but not a lot, and never so consistently and formally. And… I have picked up a few from this experiment. But why so quiet lately? What am I doing wrong? I've spoken to a fellow blogger about “belief and intent” and how it could possibly be affecting my experiment. Synchronicity may have also led me to reading about the same thing recently in Randall Keller's book, Vocies From Forever. I want you to know that I absolutely believe, without a doubt, that spirits can and do communicate. You also need to know that I have never been so inspired and focused with a clear intent… even when reviewing the sessions. There have been a few days where I struggled to get a session in when life happened. I also know that sometimes I struggle meditating (something I've tried to do before every session), and there have been a few days where I haven't completely felt grounded with a positive and high spiritual energy. Again… life happens. But right now I feel my problem might be due to more of a lack of confidence, and maybe feeling a little insulted after a few quiet days. Is there a problem with my invisible bat signal that other researchers who record tons of EVP project so well? Do they not see and hear me? Are entities communicating volumes of information but something is just standing in our way? Are they frustrated as well? Am I broken? I can go on and on… Any advice? Words of wisdom? I'm down but I haven't given up!

What Does Sarah Say About This?

Since Sarah Estep was my main inspiration for starting the experiment, today I decided to go back to her book, Voices of Eternity. I've reached out to her daily in the sessions. Maybe she can't hear me. Maybe I can't hear her. Maybe she's got bigger things going on. Maybe her soul is currently living another incarnation. Could she be reading this blog now? Am I still talking? 🙂
What words of wisdom would she give?

Frequently at the beginning I would go for days without recording a paranormal voice. Then, when I felt most discouraged and wondered if I wanted to keep on taping, someone would speak. Now, twelve years and twenty-four-thousand messages later [this was in 1988], I am convinced that I am in communication with entities from other dimensions. At the same time, I feel I have learned a considerable amount about life in the beyond.

I have two EVP sessions left for this current experiment, today and tomorrow evening. Please know that if I hear anything impressive you'll see a post on it. In the next week I think I'll create a page linked to this blog and list information about the experiment, my findings, my progress,etc. Once this current experiment is over I fully intend on continuing to record on a consistent basis… hopefully 3 or 4 days a week.
Anyway… thanks for reading and following my progress!

In other news… Have you seen this? 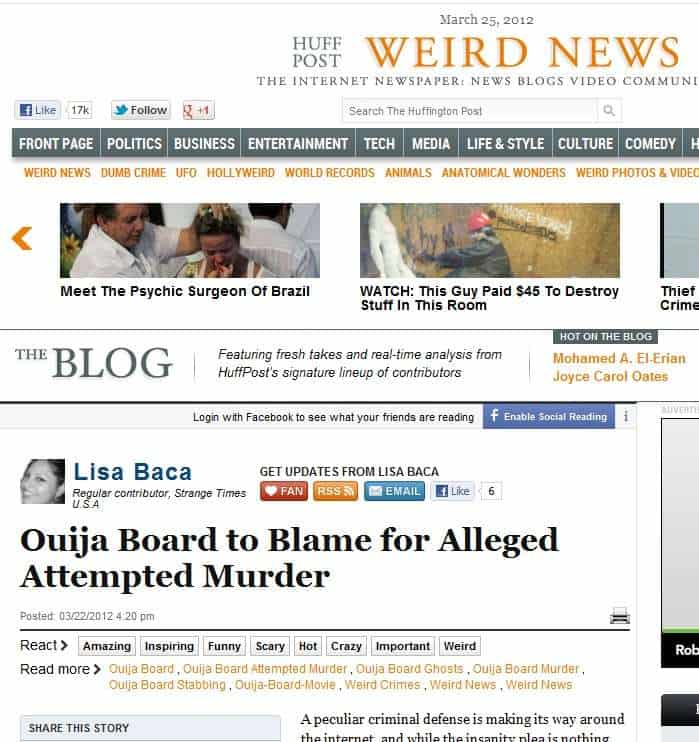 Upon arresting the alleged assailant, police were surprised that the 15-year-old not only admitted to the offense, but also confessed as to why he committed the crime, stating that “the Ouija board made me do it.”

Is it just goofy teenagers? Is it mental illness? Or can the Ouija board really be that powerful?