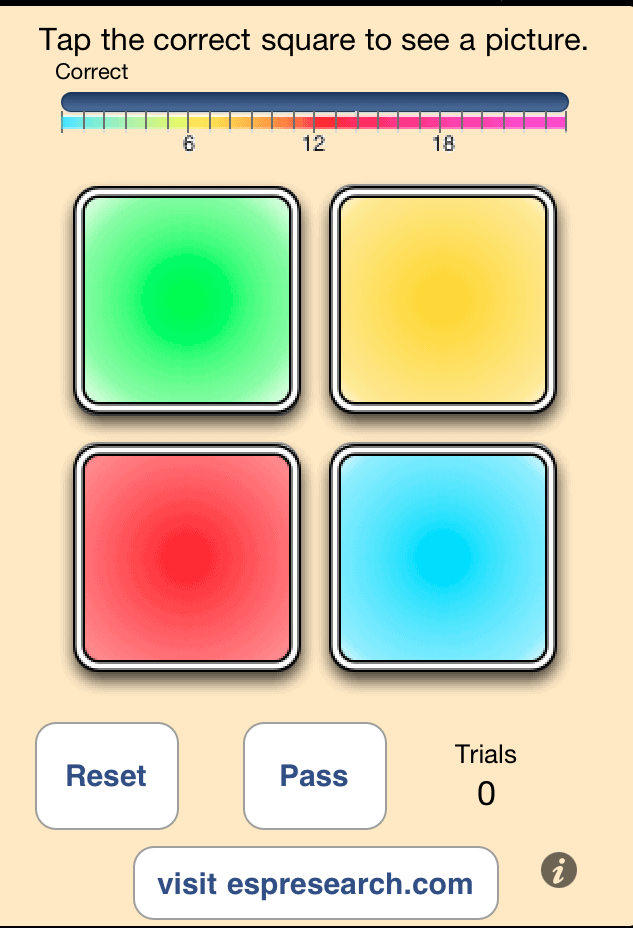 Yesterday I found a really interesting app for my iPhone after reading about it online. The ESP Trainer was developed at Stanford Research Institute under a NASA program by Russell Targ. According to ESPResearch.com, “We have found that people are able to improve their ESP scores by using a machine just like this and get in touch with the part of themselves that is psychic. This is often called a clairvoyant ability, and can enhance your life in many surprising ways.”
I downloaded this free app yesterday and have tried it a few times. It is definitely interesting. You can see from the screen shot from my phone above, that four squares (green, yellow, red, and blue) are constantly present. The idea is to use your psychic skills to determine which square “has a picture behind it”. Once you click a square, that is considered a trial. The app keeps track of the trials on the lower right hand of the screen. If the square you chose was not the square with the picture (chosen randomly), then the correct square flashes, letting you know that you were incorrect. If you choose the correct square, the picture (that seems to be different every time) will flash on your screen and then slowly fade out. The phone buzzes and plays a tone as well, but I've been playing on silent so as not to complete annoy those around me. The scale at the top of the app keeps track of the ones you guess correctly. At the end of 24 trials, it lets you know how much ESP ability you have. To start again, you must hit “reset”.
I must tell you, the highest score I got yesterday was an 8, and the app told me I had “some ESP present”, but when I got lower scores, it clearly avoided giving me false hope and just didn't say anything. 🙂 I will also say I tended to get higher scores when I took my time and really focused. When I went faster my scores seemed to be lower. (Although, I just read a comment from a user who claims he got better scores the less thought he put into it.)
From what I've read on ESPResearch.com, apparently there are different levels that you can achieve, but obviously I have not accomplished that yet. What are your thoughts about this? Apparently people really have seen results and have improved their ESP or psychic ability using this app, or at least the program that is similar to this app (I'm not sure). My only concern is, how random is it? Is there ever a pattern that repeats? Is my brain just gradually picking up on a pattern? Maybe not. I'll have to do more research. But hey, if NASA and Stanford says it works…