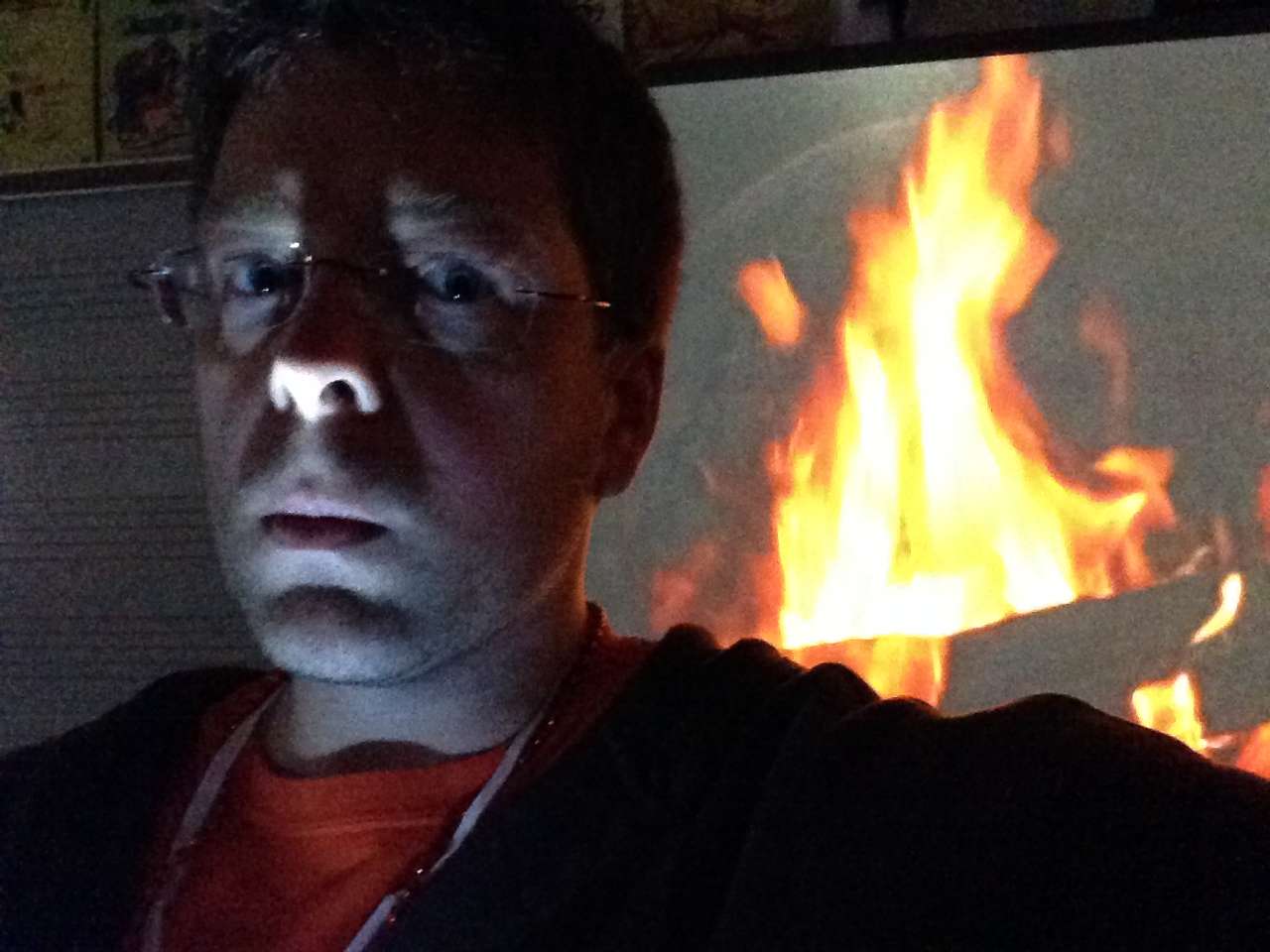 Me doing the nerdy Halloween thing with my kids at school. That's me in front of the crackling and almost warming digital fire for spooky stories.

I doubt I'm the only one, but I get so worked up and excited about Autumn and the Halloween season that it's already on my mind in August (no doubt you've noticed). By the time Halloween actually arrives, it is similar to the feeling that many people get every Sunday. You try to relax and enjoy the only day left of your weekend, but you end up wasting the day dreading the miserable Monday blues. Sound familiar? But on Halloween Eve, I found myself shoving those annoying “it's almost over” feelings aside, as I did my best to plan this year's schtick for my kids at school. A  nerdy teacher never knows how middle school students will react to something we think is cool. Some things have backfired on me. I often get the eye roll. (Gosh I HATE the eye roll.) But I took a risk and decided to try something very different this year. I think it worked. Why in the world would I allow my kids to have fun at school on Halloween when there are lessons to learn and endless assessments to take? Because it's FUN, it's already on their minds all day, and it only happens once a year! Traditional learning can peace out for a day. But here's my little secret. On Halloween, it's probably more about me than it is them. But hopefully it'll be one of the memorable days they remember before forgetting about me forever…. until two or three years from now when I pull up to the drive thru for my morning egg and cheese biscuit while they try to figure out why I look so familiar. Sigh. 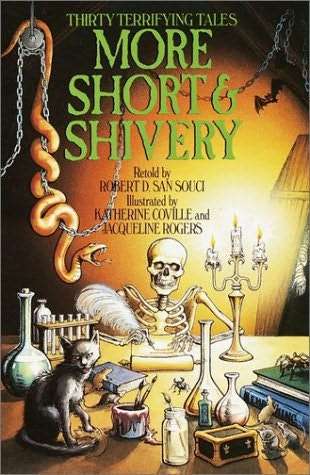 Our school's amazing and friendly librarian allowed me to peruse a few spooky books for a great story to read aloud. I chose the familiar-to-most (but not the students, apparently) urban legend “Knock…Knock…Knock” from More Short & Shivery by Robert D. San Souci.  You know this one, I promise. Two teens stranded in a broken down car (under a tree) on a night when a convicted murderer, “the Hangman”, escapes the local asylum. One teen decides to leave to go get help while the remaining frightened teen hides in the back seat waiting to hear a sign (three knocks) on the roof of the car, signaling that help has arrived. I don't need to go on, do I?
I lit a crackling digital fire on the screen behind me (it really seemed to warm the room), and with a flashlight, did my best to pull out my third-place-in-Storytelling-at-the-state-speech-and-debate-tournament-circa.-1995-skills. First period was just practice. By second period, I had it down! The kids loved it, and I think they were surprised that they were hearing a story so scary from a teacher at school. Then they thought it was cool that it was from their library.  I was lucky… and it was fun (but very tiring by the end of the day).
Then I had them get out a piece of paper and a writing utensil. A few groans. I put a spooky haunted mansion picture on the screen for inspiration, and I played Béla Bartók's third movement of Music for Strings, Percussion and Celesta, written in 1936. Years later, this piece was used in the now classic Stanley Kubrick film, The Shining. They were to listen and creatively write a short spooky story over the eight-minute duration of the piece, with a couple of minutes at the end to wrap it up. I suggested a few paragraphs, but was surprised to see so many students writing an entire page or more. And they were excited about it! We turned the fire back on and read as many of the stories as we could. There just HAS to be some future authors from my school. So many of them left their stories for me to read that I now have a rather large stack to make my way through at some point. Many of them were excited to take them home to either finish or share with others. I was very tempted to seek permission to share a few of them here.
Here's a great recording of the Bartók piece. Why not try the same writing activity? Let me know how it goes!

So, you see? We were nerdy. AND we had fun! AND we were educational… and all because I wouldn't have had the focus for much of anything else on All Hallows Eve.

The rest of the evening started out a little strangely. It rained off and on all day. By 6:00 I still hadn't set up in the front yard for the trick-or-treat schtick. I was about to make alternative plans in front of the television when I heard goblins walking the sidewalks outside. I should have known that sprinkles wouldn't keep kids away from candy. So I missed a few, and the “schtick” was modified and I rushed around moving it to the front porch. My awesome neighbors were already participating as I was almost caught bah humbugging on Halloween. There weren't nearly as many kids out as usual, but we saw some cool costumes and had lots of fun, as always. It was sure cold and windy though.
I hope everyone enjoyed the run up to Halloween! The good news is there's still plenty of Autumn left, and my eye is already on that big Turkey Dinner in a few weeks!
.
By the way! Before I sign off, I'm not sure who has written the absolutely lovely reviews of my blog on TopParanormalSites.com, but I really appreciate it! Thank you for reading!