A little more than a year ago, I was fortunate enough to get my hands on a ticket to an advanced screening of the then upcoming film, The Conjuring. In doing my research for the review that I wrote for the movie, I discovered the first two volumes of Andrea Perron's House of Darkness House of Light, the books that tell of the author and family's very real story that inspired the movie. The first two volumes of Andrea's books are not light reads, but I consumed them as quickly as I could and blogged several times with my thoughts as I made my way through them. If you read any of those posts (that are some of my most popular, by the way), you know that I very much enjoyed the books, though there seemed to not be a large amount of connection to the movie. As you probably know, The Conjuring ended up being a huge success, and so it seemed that I was immersed in all things The Conjuring and House of Darkness House of Light for an entire summer and fall.
Andrea's first two volumes were published two years apart, and many of her readers and fans only discovered her due to The Conjuring, and so for a year she has been experiencing lots of pressure to complete and release the third and last volume. 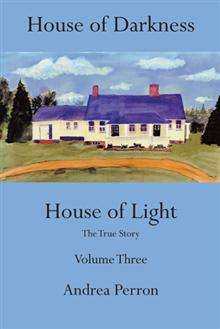 This weekend I share great news with you! Just days ago, the third volume was released, and on her Facebook page, Andrea Perron says “This last book was the most emotional and the most difficult.” She also says “The third volume is the best of the three books because it brings with it the gift of hope. Resolution. Perhaps even revelation.”

Book Description for all three volumes, from the publisher's site:

Roger and Carolyn Perron purchased the home of their dreams and eventual nightmares in December of 1970. The Arnold Estate, located just beyond the village of Harrisville, Rhode Island seemed the idyllic setting in which to raise a family. The couple unwittingly moved their five young daughters into the ancient and mysterious farmhouse. Secrets were kept and then revealed within a space shared by mortal and immortal alike. Time suddenly became irrelevant; fractured by spirits making their presence known then dispersing into the ether. The house is a portal to the past and a passage to the future. This is a sacred story of spiritual enlightenment, told some thirty years hence. The family is now somewhat less reticent to divulge a closely-guarded experience. Their odyssey is chronicled by the eldest sibling and is an unabridged account of a supernatural excursion. Ed and Lorraine Warren investigated this haunting in a futile attempt to intervene on their behalf. They consider the Perron family saga to be one of the most compelling and significant of a famously ghost-storied career as paranormal researchers. During a seance gone horribly wrong, they unleashed an unholy hostess; the spirit called Bathsheba; a God-forsaken soul. Perceiving herself to be the mistress of the house, she did not appreciate the competition. Carolyn had long been under siege; overt threats issued in the form of fire…a mother's greatest fear. It transformed the woman in unimaginable ways. After nearly a decade the family left a once beloved home behind though it will never leave them, as each remains haunted by a memory. This tale is an inspiring testament to the resilience of the human spirit on a pathway of discovery: an eternal journey for the living and the dead.

The book does not appear to be on Amazon right now, but can be purchased HERE.
My “To Be Read” shelf has never been more full, but I look forward to getting this one on the doorstep and finishing the story!
Peace!

My previous The Conjuring and House of Darkness House of Light posts (most recent first):