Inspired by the amazing Renae Rude – The Paranormalist, who is a fellow lover of all things autumn and spooky, I decided to begin a new autumn tradition of adopting one or two gravesites.
In my mind, the idea is to choose an older grave, perhaps forgotten (of course how does one really know this?) that may also need to be tended to. The two local cemeteries that I chose happen to be fairly well cared for. I would think you'd want to choose a grave that really speaks to you, either metaphorically or literally. As someone who finds cemeteries fascinating and enjoys spending time and taking photos in them, I found it hard to not just gravitate toward the interesting and most beautiful graves. But at the same time, I didn't want to ignore those feelings. Lastly, a requirement for me was to be able to identify a name on the marker. This is often hard to do in cemeteries. You might argue that a grave that has lost the identity of the body resting there would be more in need of adoption, but for my first experience at this, I really wanted to be able to connect with a name as well. It is also my hope that after this initial post I'll be able to research genealogy and share that with you as well. After selecting my graves, I'd commit to returning every so often throughout the season, keeping their soul in my thoughts and praying that they are at peace.
So this last Saturday I was very excited to set out to adopt two graves for an early autumn kickoff. I wanted to choose one grave at two different cemeteries. It was an absolutely beautiful day and I was honored that Joe was willing to accompany me. (Normally this would be a little weird for him.) We went and picked up two beautiful bunches of flowers for a total of $10 and headed for Linn Cemetery in Wentzville, Missouri. Linn Cemetery is a place I've visited a few times in the last few years. Click HERE for photos from my first visit to Linn Cemetery. 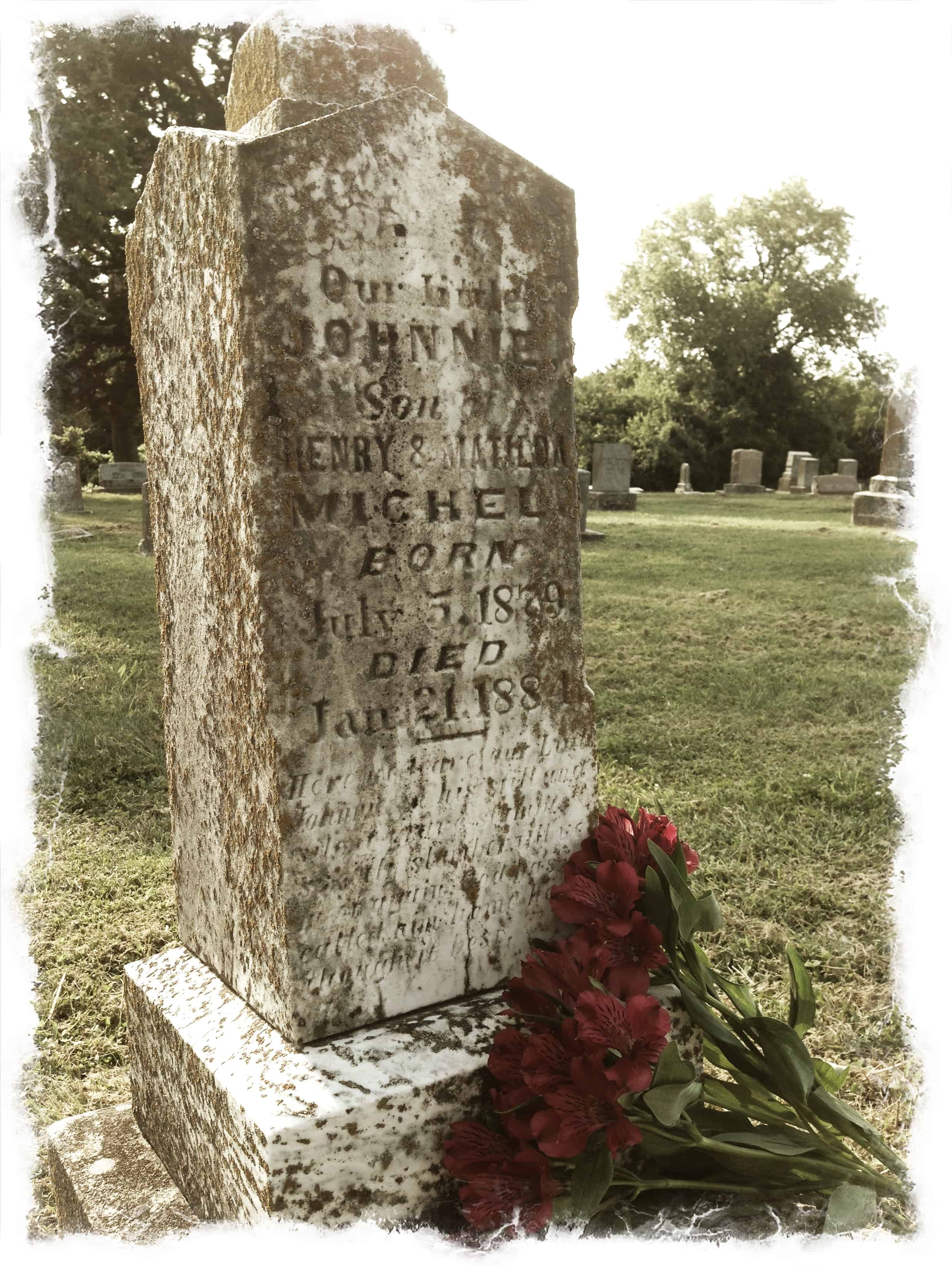 Johnnie was four and a half years old at the time of his death. He was buried near two or three other Michels, but we found no Henry or Matilda Michel (his parents, according to the marker) near Johnnie. We wondered why the parents weren't buried here, or at least nearby. Did life take them somewhere else after this loss? Did they have other children that lived hopefully longer lives? And what happened to Johnnie? Was it sickness? An accident?
Here's a close up of the writing below the dates. 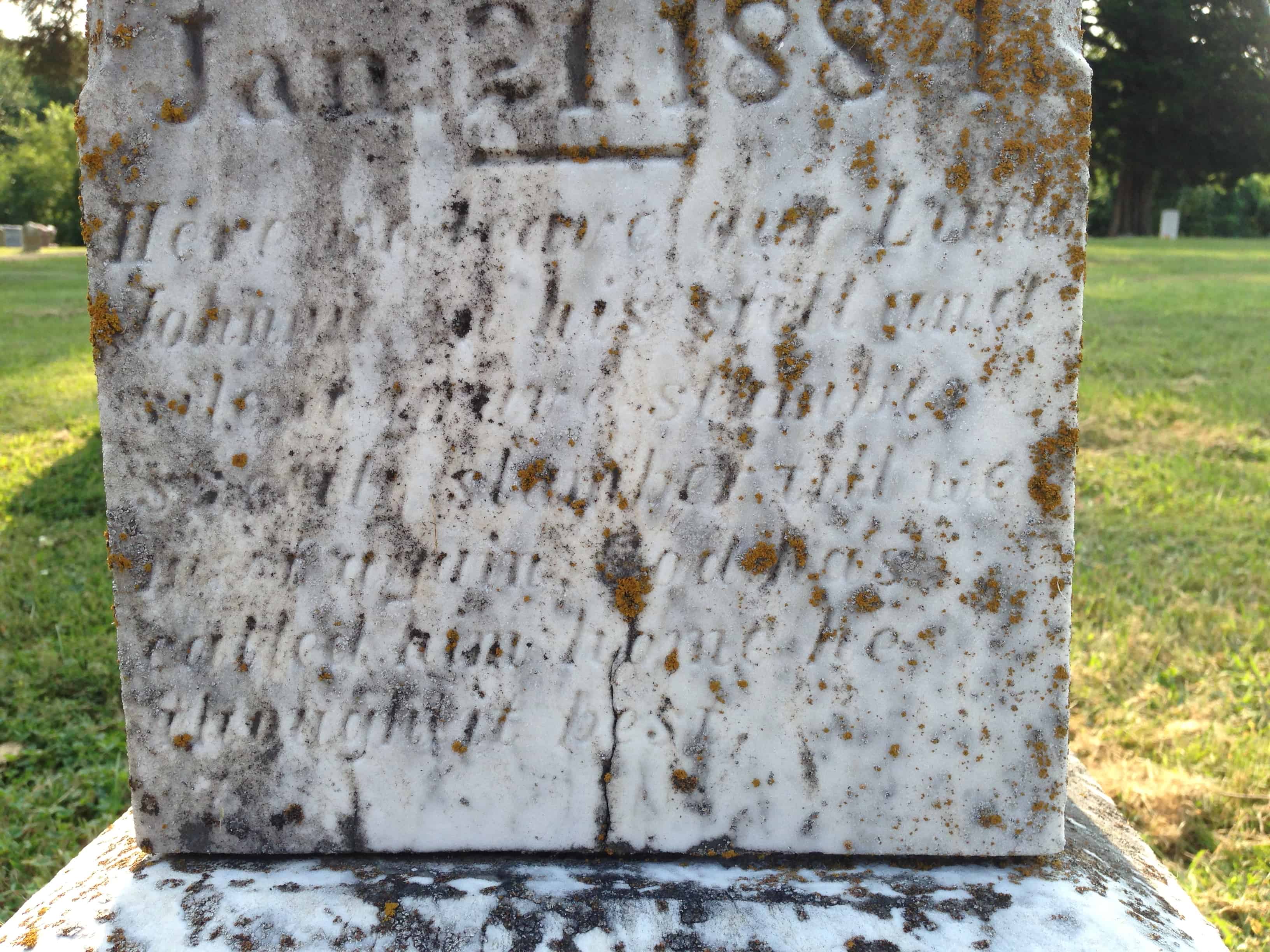 To the best of my ability, it appears to read “Here ____ our Little Johnnie ____ his still and silent… ?? …till we meet again. God has called him home, he thought it best.”
I visited a bit with Johnnie, wondering out loud about his story and asked who the other Michels buried near him were. I promised to return a few times and keep him in my thoughts, hoping and praying he is at peace.
Our next stop was the Gumbo Cemetery in Chesterfield, Missouri. I had come across this cemetery on accident only the day before. I was excited to stop by and check it out. 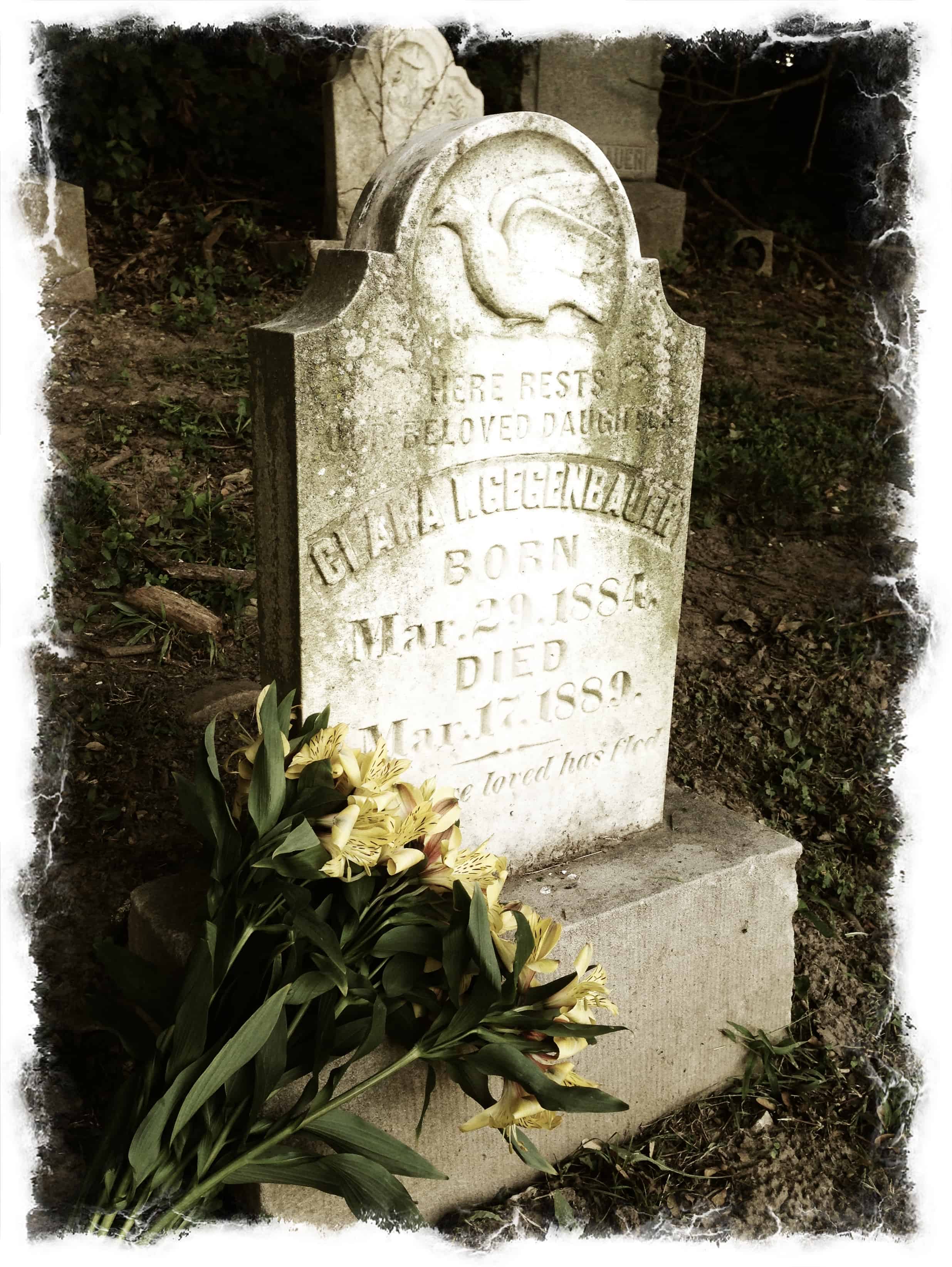 Clara's grave is up on a scenic hill along a tree line. Inscribed on her marker is the message “A voice we loved has fled.” That really touched me. Like Johnnie Michel, Clara died just short of her fifth birthday. In the photo it almost appears to be taken at dusk, due to the canopy of tree limbs overhead. Clara rests among seven other graves that are clearly grouped as a family. Clara's grave stands proudly on the front left corner in the group. From my first step into the cemetery, this group of markers off in the distance and on top of the hill caught my attention. 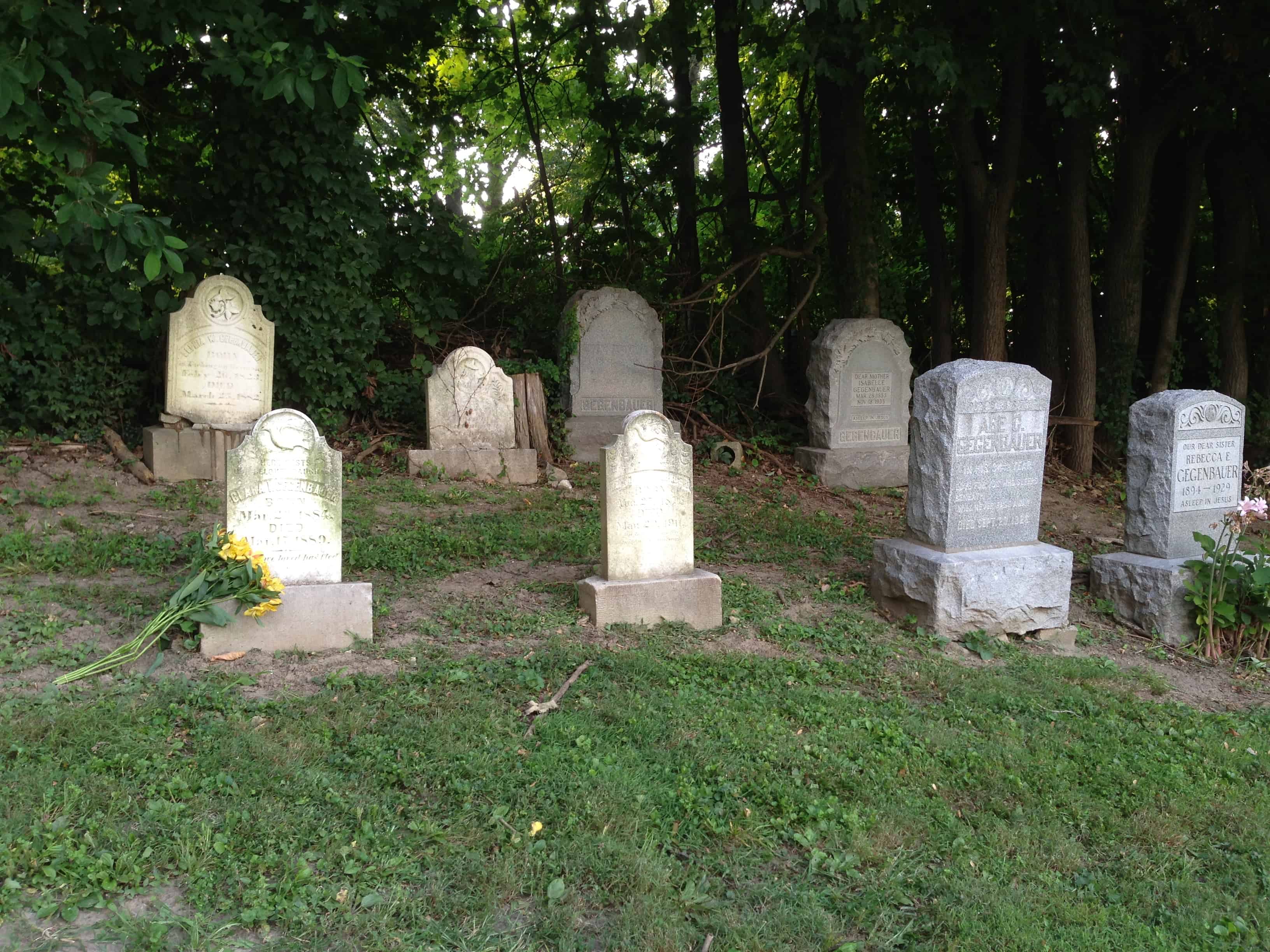 I visited with Clara, pondering the same questions that go through one's mind when you see the resting place of any young child. I also left her with the same promise I gave Johnnie.

So was I meant to be drawn to the graves of two children, approximately the same age? Or did I subconsciously choose a little girl out of fairness after already choosing Johnnie? I also think it's interesting that Clara was born just months after Johnnie died. At the risk of creating a dramatic plot that doesn't exist, I wonder if there is some kind of connection between the two, whether it's between the two families, or a great plan designed from the other side. What an interesting thought. Ha! Maybe I should write a book.
I'd love to know what you think about this new tradition of mine. If you find it interesting, be sure to check out Renae Rude's fascinating post in the related articles below. Stay tuned in the coming months as I hope to piece together just a bit of the history of these two families. This will be my first attempt at genealogy, so wish me luck.

Graveyards, churchyards and cemeteries: spending an afternoon with the dead. (Renae Rude – The Paranormalist)

Click here for more cemetery posts, or visit the “Cemeteries” category on the right. (Big Séance)