204 – The 10th Anniversary of BigSeance.com and the Top 10 Podcast Episodes 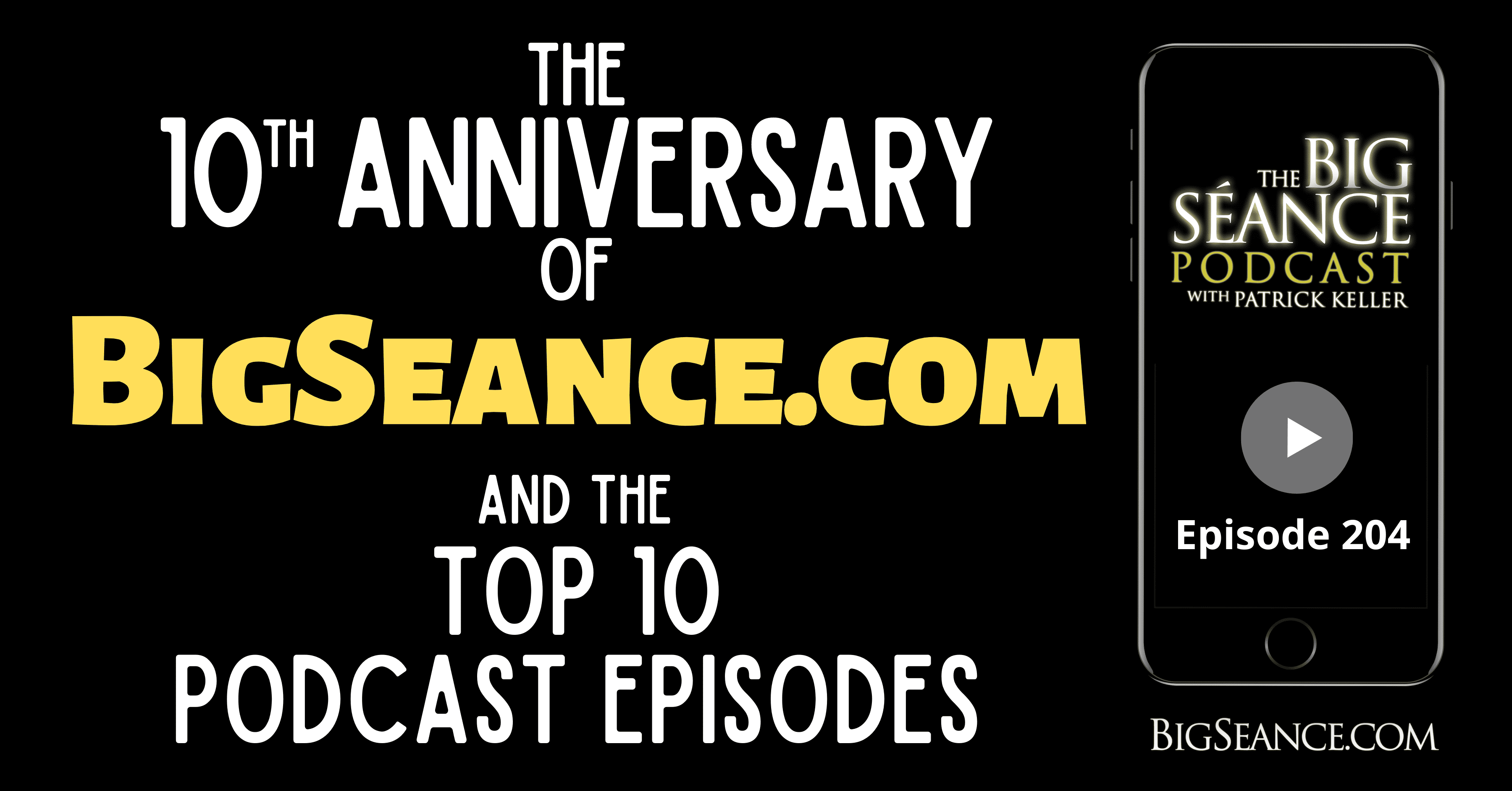 Celebrate the 10th Anniversary of BigSeance.com with this special episode of the podcast! We’ll be looking back at the TOP 10 most popular episodes!

“In 2012, my small paranormal investigation team had been out and about for 2 years, I would soon be inspired by Sarah Estep to do my own EVP experiments at home, and I was about 3 years into my spiritual shift that you hear me talk about often. I had just taken a channeling class where I met my spirit guide, Merlin. And I was binging every book on paranormal and spiritual topics that I could get my hands on! I was also binging every episode of both The Ghost Whisperer and Ghost Hunters. I needed a place to share my thoughts on this new journey, and I had TONS of them! Blogging was all the rage, and so on February 5th 2012, I wrote my very first blog post at BigSeance.com. It was very short, but it was about spirit guides. And looking back at this post, you can tell that I had already been marinating in books about mediumship and the Other Side, referring to the Other Side as Home, and I capitalized ‘Other Side' and ‘Home'.” :50

“That was 10 years ago today. In some ways, it feels like yesterday, but at the same time it kind of feels more like 30 years ago, especially when I read my thoughts from that time.”

The all-time top blog post at BigSeance.com is a post about Being Able to Read in Your Dreams. To this day that post is visited by someone in the world almost every single day. The popularity of the post later inspired episode 66 of the podcast. 3:28

The all-time most popular search terms that people Googled before landing at BigSeance.com have something to do with Andrea Perron or the Perron family. The real life experiences of the Perron family inspired the Conjuring films. Andrea Perron was a guest on the Big Seance Podcast in episode 98. Another popular search term that led people here is, oddly enough, Thomas Edison or his invention, the phonograph. And as you’d expect, there are several variations of, “What does it mean if I can read in my dreams?” 3:50

“After blogging almost every single day for two years, I began producing and hosting the Big Seance Podcast. Over the past 10 years I’ve met so many fascinating people, and even some of you, my listeners! And there’s no way to measure how much I’ve learned and grown.” 4:28

In this special episode, Patrick channels his inner Casey Kasem to unveil the top ten most popular episodes of the Big Seance Podcast! A portion of each of those ten episodes is featured. 4:50

Number 9 is episode 159 with DeAnna Simpson, who was joined by Joni Mayhan who authored the book, The Hanover Haunting: The DeAnna Simpson Story. This story takes place in a home made popular by an episode of the Travel Channel’s The Dead Files. “I will never forget the story of this one terrifying experience that I asked DeAnna to share in that episode.” 10:07

Number 8 is episode 164, Ouija Paranormal and Beyond Part 1. This was one of many appearances by Karen A. Dahlman. This particular one was live streamed, and in this clip, Karen was answering a listener question. 15:45

Number 7. Episode 148. Everyday Intuition with Slade Roberson. In this clip, Slade told two stories from terrifying memories of one of his childhood homes. 17:39

Number 6 is The Horrors of Fox Hollow Farm with Richard Estep, Episode 150. Here’s some backstory. Fox Hollow Farm is the beautiful Indiana home, complete with indoor pool, where Herb Baumeister allegedly murdered numerous men from the gay community in the 1990s. Chances are you’ve heard of this place, and Richard Estep knows it well. In this clip, Richard discusses a creepy video, from local TV news, that can still be found on YouTube. 26:37

Number 3 is another great episode with Karen A. Dahlman, episode 146. “This was one of our infamous weekends together, this time staying overnight at the haunted Lemp Mansion in St. Louis. In this clip, I’ll drop you right into the middle of a Ouija seance and spirit box session in the Lavender suite.” 40:27

Number 2! The second most popular episode of the Big Seance Podcast is one of Patrick's favorites – Episode 147 with the late Barb Huyser, who passed only 8 months ago. She was one of the greatest story tellers. But she was also incredible at something she called, “Paranormal Social Work.” This touching story had to do with putting the ghost of a little girl on a behavior plan. 48:12

So here we go… Number 1! The most popular episode of the Big Seance Podcast is Episode 149 – What the Dead are Dying to Teach Us. This was just one of the appearances by Medium Claire Broad. 55:49

Here’s to another 10 years!

A special THANK YOU to Patreon supporters at the Super Paranerd and Parlor Guest level! 1:06:30