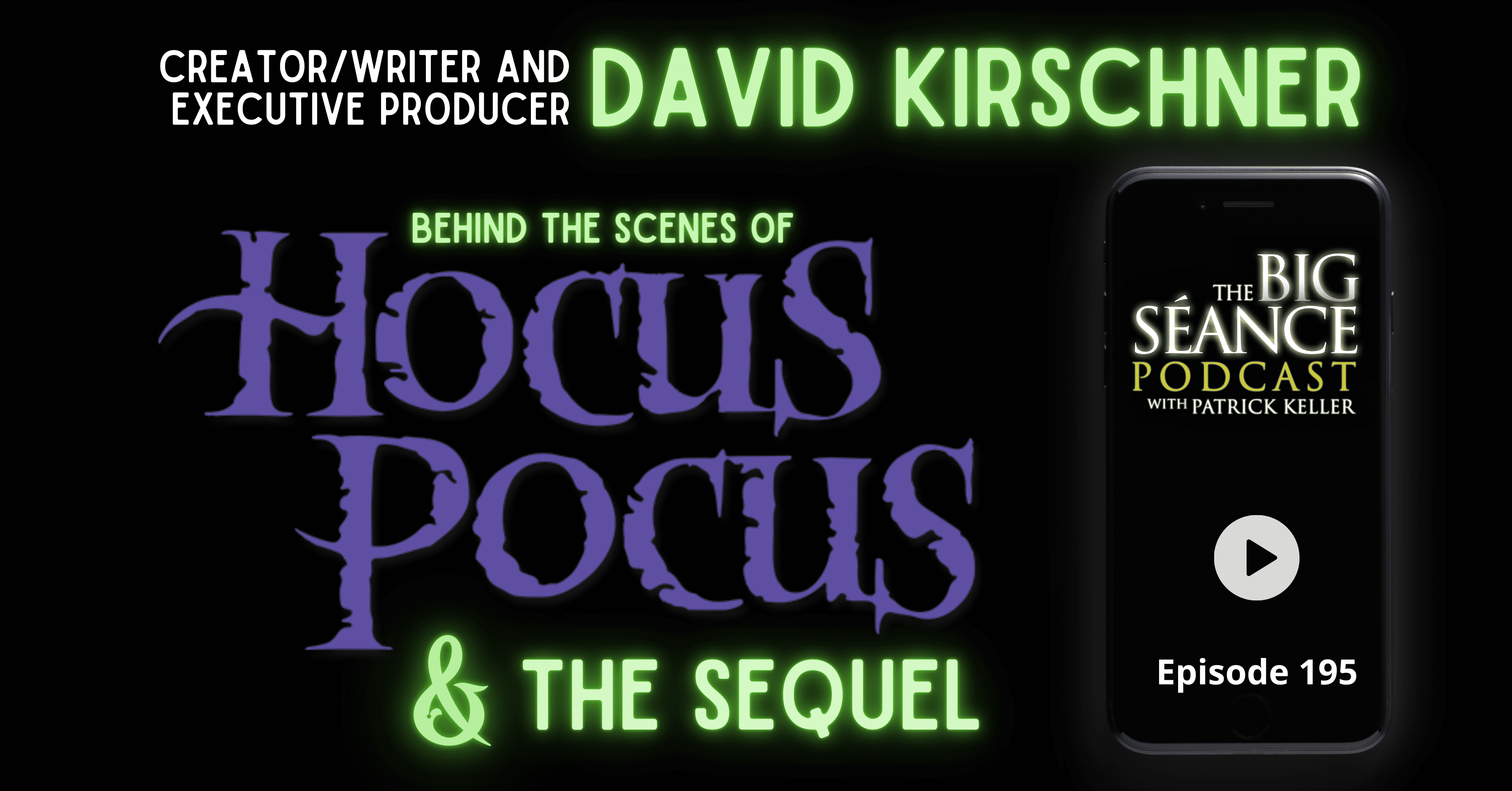 Hocus Pocus, the 1993 Disney film starring Bette Midler, Sarah Jessica Parker, and Kathy Najimy, is one of America's most popular family films to watch around Halloween. In this delightful interview, creator/writer and producer David Kirshner dishes on the inspiration for the story, behind-the-scenes talk, and what everyone wants to know about the upcoming sequel! Plus Patrick gets a tour of David's magical creative office space!

In 1993, Disney released a film called Hocus Pocus. Though it starred Bette Midler, Sarah Jessica Parker, and Kathy Najimy, it was pretty much considered a flop at the time. Since then, many audiences have discovered the film, and it can be found on cable, playing pretty much non-stop in October. It truly is a cult favorite now! Partly filmed around Salem in New England, partly filmed on a sound stage, it was directed by Kenny Ortega. Our guest for this episode, David Kirschner, was one of the film’s producers, but was also the creator and writer of the story. He pitched the whole idea. Wait till you hear how the whole thing came about. And the new sequel we’re dying to hear about? He’s executive producer. Even if you haven’t seen Hocus Pocus, you know David’s work, if you’ve seen a Chucky doll or seen Child’s Play. He began his career working with Jim Henson’s Muppets and Sesame Street. He wrote and illustrated the series of children’s books known as Rose Petal Place. In 1986, Kirschner created and executive produced, with Steven Spielberg, the smash hit, An American Tail, which became one of the most successful animated films in history. 1:24

The touching storyline of Max, played by Omri Katz, and his little sister Dani, played by Thora Birch. 8:32

That “E.T. kind of cry.” The Ghost and Mrs. Muir and the inspiration for the final scene in Hocus Pocus. 9:45

The Halloween nostalgia and memories of David’s childhood are the foundation of Hocus Pocus. 12:23

“They were magical years. They were the kind of years that you could go out on your bike and be gone all day and not end up on the back of a milk carton.” 15:01

Book, the Black Flame Candle, and presenting the Hocus Pocus concept to Disney! 26:22

John Debney and the score for Hocus Pocus. 32:40

The joy that Hocus Pocus brings to the world, Symbolism, and Gary Marshall. 38:38

Support for a kid with magical thoughts! 41:37

Everything you need to know about the sequel! 45:12

Does David Kirschner believe in the paranormal? 47:02

A tour of the dreamy workspace in David’s home. Visit the video highlights of this tour on YouTube. 54:20

The Black Flame Candle, Book, a Zompkin, a Don Knotts inspired Broom, a costume worn by Bette Midler, and a life-size Billy! 54:42

Other fascinating items, including a note from Steven Spielberg, a story about Michael Jackson, and an original sketch of Binx! 57:34

A special THANK YOU to Patreon supporters at the Super Paranerd and Parlor Guest level! 1:02:10

For More on David Kirschner